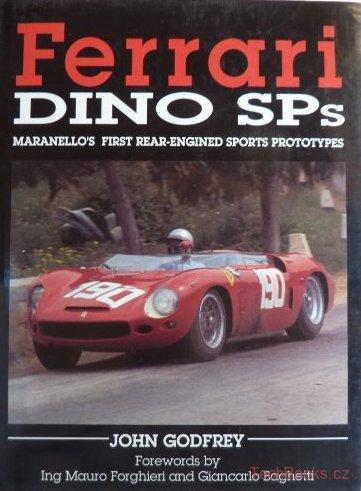 From their first appearance in 1961 it was clear that the Dino SPs, the first ever rear engined sports prototypes from Marinello, were destined to break new ground for Ferrari in what was to become one of the most demanding and exciting periods in that marque’s long and noble history. This little known and often under rated group of cars carried Ferrari through an uncertain transitional period and convincingly provided a sound and proven nucleus for a full blooded V12 sports car in 1963. They also provided the basis for further progressive development and the introduction of new technology, culminating in the fabulous 330P4 in 1967. The 246SP was Ferrari's first attempt at building a rear engined sports car, yet once off the drawing board it required very few and only minor modifications during the next two years. In that short time, the 246SPs turned in a truly remarkable performance which clearly demonstrated their race winning potential. In the nine classic events in which they participated, they were unrivalled, clocking up no fewer than five new lap records, and achieving fastest laps in six of the races. They contributed immensely to the continued Ferrari dominance in sports car racing, both in terms of outright wins and as pace setters. John Godfrey covers the origins, prototypes, evolution, development and individual competition histories of the SP cars from 1961, and goes on to bring the story right up to date. He acquired one of these rare cars himself which he then painstakingly restored to its former glory; over the years he has come to appreciate not only the cars themselves, but also their lasting influence on motor racing history. Also presented are personality profiles of some of the main people involved with the cars: Ingegnere Carlo Chiti, Vittorio Jano, Wolfgang Graf Berghe von Trips, Phil Hill, Olivier Gendebien, Paul ‘Richie’ Ginther,the Rodriguez Brothers, Romolo Tavoni, Eugenio Dragoni, and Luigi Chinetti.

At the 1966 Turin Motor Show two Dinos were

Features - THE definitive record of the little V6

The striking design of the Dino combined

Guide to the development of individual models Dino