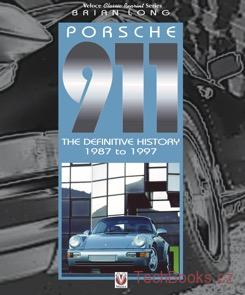 The fifth volume in Brian Longs series, chronicling in definitive depth the history of the evergreen Porsche 911, from the earliest design studies to the water-cooled cars of today. This newly updated and enlarged 2nd edition looks at each 911 model and its derivatives, taking in the various specials and competition cars along the way, and includes the 996 models up to 2005. Historical facts, full model specifications and racing history are covered in great detail. This book is beautifully illustrated throughout, with full colour photographs, official brochures and advertising.
A must-have part of the ultimate Porsche library, this book covers the models from 1997 to 2005, and the complete series covers 50 years of progress from the earliest design studies to the era of the water-cooled cars.

The 996 represents very good value as a second-hand buy at the moment, so much so, having also now this book, Im sorely tempted.
Retro Speed

Even if you already have the first edition of the book in your Porsche library, theres no reason not to buy this edition.
Liebe zu Ihm

Models covered:
All Type 996 variants of the 911 range

Features • The definitive history of the