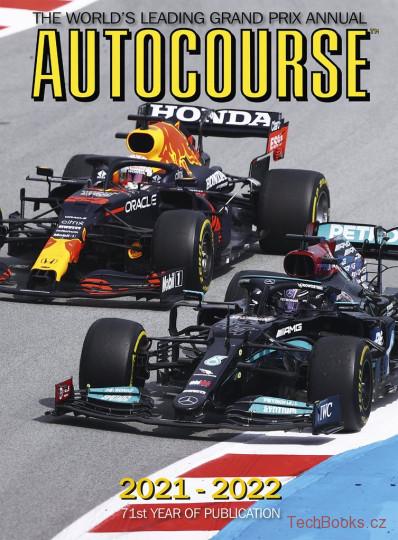 For 2021 a record 22-race schedule was planned, and despite changes to venues, the F1 championship was very much up and running by March 2021.

Mercedes and Lewis Hamilton – now the winningest driver in history – broke more records. The Briton smashed through the 100 pole-position barrier, and later in the season reached a century of Grand Prix wins in the face of a real championship challenge from Max Verstappen.Red Bull Racing and Honda seemed to have all but matched Mercedes to provide the fans with a thrilling wheel-to-wheel battle, which would end up with some controversial collisions as the season reached boiling point.

The nuances of F1’s designs and development are analysed team by team by the much-respected Mark Hughes, enhanced by Adrian Dean’s handsome F1 car illustrations.

AUTOCOURSE includes all the hectic action from the top Touring Car series – the World Touring Car Cup and the British Touring Car Championships as well as the reconfigured DTM Series now running GT cars from Audi, Mercedes, BMW and Ferrari.

From America, Gordon Kirby recounts a thrilling Indycar series, featuring a mix of youthful talent such as Alex Palou and Pato O’Ward, both of whom vying to overturn the established veterans who have dominated proceedings over the past decade. In an emotional return, Helio Castroneves took a record equalling fourth Indy 500 victory, whilst an appreciation is paid to the legendary three-time Indy 500 winner the late Bobby Unser. The ever-popular NASCAR stock car series ran from February to November with barely a weekend’s break, to feature more than forty races before the final championship play-off round at Phoenix, Arizona.

In a single essential volume, AUTOCOURSE provides the most comprehensive record of world motor sport, complete with full results not found anywhere in a single volume.

It is required reading for all motor sport fans worldwide.

Cena pro Vás 419 KČ
The Treasures of Formula One

The Treasures of Formula One is not only a

Get ready for the best in the business! The

The 2015 FIA Formula One World ChampionshipTM was

The 2015 FIA Formula One World ChampionshipTM