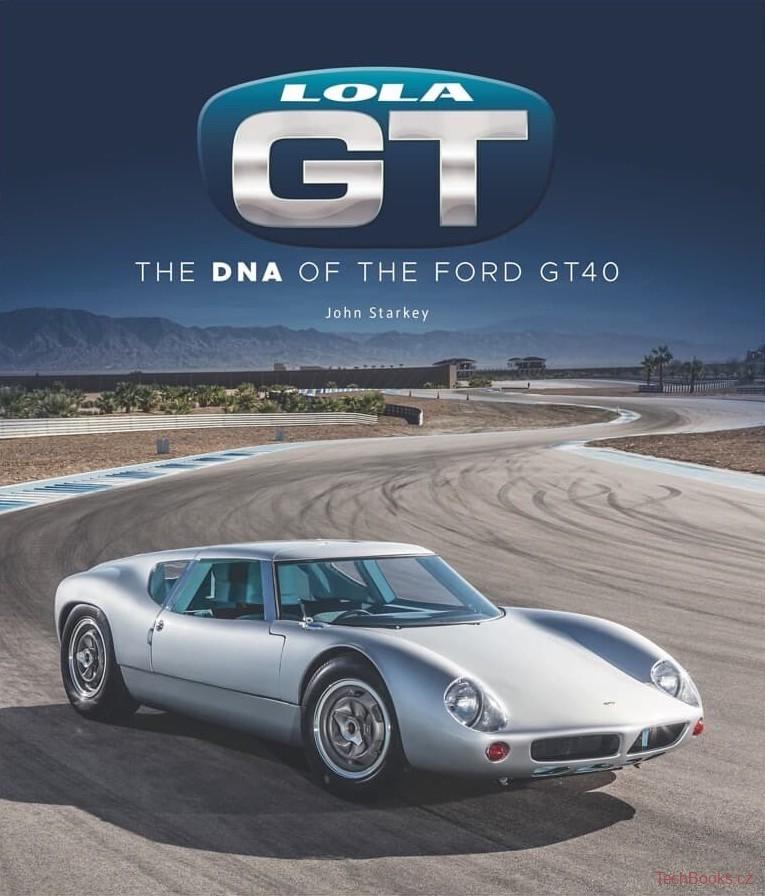 This is the story of Lola Cars Ltd and its groundbreaking Lola GT Mk 6 of 1963 – the car that inspired the Ford Motor Company to design the all-conquering Ford GT40.

In Lola GT: The DNA of the Ford GT40 established automotive author and race car consultant John Starkey reveals reveals how the Lola GT Mk 6 inspired Ford to create the mighty GT40. The world of motorsport in the 1950 and 60s was a time of great change. Le Mans was once again the World's premier sports car race, and teams including Jaguar, Ferrari, Mercedes and Cooper battled for champhionship titles, often putting lives on the line in the pursuit of victory.

It was during this period that Lola Cars International Ltd, was founded, by Eric Broadley in Bromley, UK, in 1959. Created to build sell and race cars, Lola's first racing sports car, built in 1956 by Eric and his cousin Graham, was a 750cc Ford-powered Austin 7 Special (the 'Broadley Special'), and was to become the first of a number of specials created over the following years.

John Starkey describes Eric's early career, the people, and the events behind Lola, all illustrated with quotes from those who knew, worked and raced with him. From its successes building and racing cars, to the creation of the Lola Mk 1, and the eventual metmorphoses of the GT Mk 6 into the Ford GT40, this is the complete and detailed history.

The introduction of new FIA rules in 1962 led Eric to design the GT Mk 6 to specifically meet the regulations. The minimal, engineless prototype displayed at BRSCC's Racing Car Show in January 1963, was far from a working version, taking 52 hours to get ready, and arriving at the show two days late. But, with many admiring glances and glowing comments, it soon became the star of the show.

It makes the Ferrari Berlinetta look like a lorry.
Nick Syrett, British Racing and Sports Car Club Secretary, commenting on the prototype Lola GT Mk 6 in Car and Driver, July 1963).

Detailing the GT Mk 6 from initial concept and design, to innovative build, testing, and later development with Ford, the story is illustrated with dozens of photos, quotes and technical details, providing an unrivalled behind-the-scene record and placing the reader in the heart of the action.

The GT40 is often perceived as the ultimate all-American race car, and when it was unveiled to the press in 1964 little was said about where the car came from. The perception that this car was an all-US creation was, no doubt, far from discouraged, yet nothing could be further from the truth.

While only three Lola GT Mk 6 were ever built, the huge significance of the role of Lola and the GT Mk 6 in racing history, and to the Ford GT40 in particular, cannot be underestimated. The GT was a revolutionary car, a rear-engined GT racing car with some of the best technology of the time – and it was immensely quick.

Following the MK 6 concept's Racing Car Show debut, the car was raced at Silverstone and the Nürburgring 1000km, with a second car, sporting a lightweight aluminium monocoque, being completed and prepared for the '63 24 Hours of Le Mans. Despite there not being enough time to fully prep or test the car – and it having to be retired during the race due to a gear selector failure – Ford Motor Company could see the Mk 6's immense potential, a potential Ford wanted for itself.

The catalyst in the creation of the GT40 was a document distributed to the directors of the Ford Motor Car Company and those associated with its racing divisions, a confidential report titled GT and Sports Car Project. Created by Roy Lunn, an English automotive engineer who had previously worked for AC Cars, Jowett and Aston Martin, and was then manager of the Advanced Concepts Department – Special Vehicle Activity division. Lola GT: The DNA of the Ford GT40 contains a dedicated chapter with extensive reproductions of the original version of the report issued to Carroll Shelby, providing for an unmatched insight into the Ford's Advanced Concepts Department, and its special vehicle activity at the time.

Extensive photographs of internal and external features and design, including concept renders and line drawings, are accompanied by in-depth text covering all aspects of body, chassis, frame, engine and mechanicals, for Ford's racing concept car, as well as measurements and technical specifications comparing original and reworked Lolas with Ford's GT Prototype concept.

Ford in the driving seat

Early in 1963, Ford approached Enzo Ferrari with a view to purchasing his company. Ferrari eventually called off the deal in May '63 after realising it would provide him with little autonomy over his beloved race cars, but this didn't deter Ford. Instead, Ford looked at buying European expertise from elsewhere, and Lola were already in its sights. Ford sent a small delegation including Lunn and Shelby to Le Mans, which took place on the 15th and 16th June 1963.

But, the first edition of GT and Sports Car Project was distributed on 12th June, and while it didn't mentioned the GT Mk 6 explicitly, from the measurements listed, including height, length, wheelbase – even the price – it was obvious that Ford had already been looking to the Lola GT Mk 6 to supply the DNA of its GT40 project.

Ford eventually bought the car and tested it extensively, bringing Broadley on board as a Design Consultant, and moving Lola operations from Bromley to a new factory in Slough, adjacent to Ford Advanced Vehicles. Lola GT documents the testing and development carried out by Ford, and reveals how the very British GT Mk 6 evolved to become the ultra-American GT40, setting the scene for the epic blockbuster-spawning battle between Ford and Ferrari at Le Mans three years later in 1966.

Allen Grant and the LGT/P

Featured extensively in this book is Allen Grant's Lola GT Mk 6 prototype, LGT/P (watch Allen discuss his LGT/P on Jay Leno's Garage). Grant's path to owning LGT/P, and the story of how his original 1965 purchase came to be is revealed.

With chapters covering Grant's ownership of the car post-1965 in detail, and a thoroughly illustrated record of Grant's 2008 LGT/P renovation, Lola GT brings the reader up to the present day, and is undoubtedly the most complete and detailed record of one of motor sports most influential cars available, not to mention an immersive dive into the DNA of the Ford GT40.

A collection of Lola race cars in competitive

Rarely had there been a racecar quite as beautiful

In the most glittering era of sports car racing,

Description This is the definitive development and