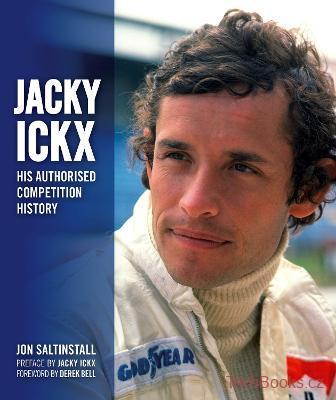 Jacky Ickx is one of the true greats of motor racing. In a career spanning nearly 40 years, he was both highly successful and hugely versatile, racing at the highest level in a wide variety of categories - including Formula 1, sports cars, touring cars and rally raids - and winning throughout. Among many accolades, he won the Le Mans 24 Hours an unprecedented six times and twice finished runner-up in the Formula 1 World Championship. This exhaustively researched book has been written with his full co-operation and outlines every one of the 565 races that he contested in cars and on motorcycles, forming a detailed and insightful record of his racing life supported by over 850 photographs, many of which have never been published before. This is a racing driver's biography of exceptional depth that all motorsport enthusiasts will treasure.

Key content
* Starting in motorcycle trials, Ickx was twice crowned Belgian champion before switching to four wheels; he immediately proved himself a winner in touring cars and single-seaters, becoming European Formula 2 Champion in 1967.
* From 1967, he established himself as a star in sports cars, driving blue-and-orange Gulf Mirages and Ford GT40s to numerous successes, culminating in his first Le Mans victory in 1969 with its famously close finish.
* Snapped up by Ferrari for 1968, he achieved a heroic first Formula 1 victory in that year's rain-soaked French Grand Prix, confirming his career-long reputation for peerless driving in wet weather.
* Other than one season with Brabham, Ickx spent his best Formula 1 years with Ferrari, achieving eight wins in the period 1968-72, and twice finishing second in the World Championship standings, with Brabham (1969) and Ferrari (1970).
* Post-Ferrari, his Formula 1 fortunes waned but he thrived in sports cars, claiming three successive Le Mans victories, with Mirage in 1975, then with Porsche.
* After his fifth Le Mans win in 1981, the rebirth of sports car racing in the Group C era from 1982 saw Ickx as anchorman in the all-conquering works Porsche team, a four-year period that brought his record sixth Le Mans victory, 12 wins in total, and two World Champion titles.
* After retirement from circuit racing, his later career took him into entirely different motorsport adventures in rally raids, where his Paris-Dakar record includes victory in 1983 (driving a Mercedes-Benz) and second places in 1986 (Porsche) and 1989 (Peugeot).

An ideal gift for lovers of fine photography, fast