Lancia 037 - The development and rally history of a world champion 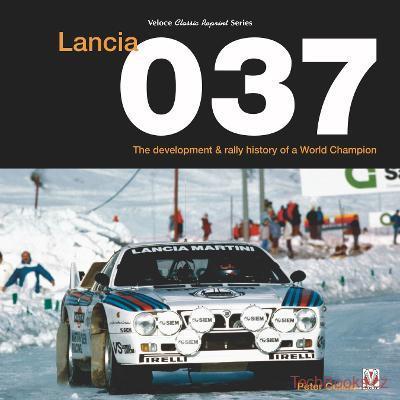 In the late 1970s the problem facing any manufacturer that wanted to continue taking part in the World Rally Championship during the next decade was that the rules were being changed. Not only that but nobody knew until it was almost too late what form those new rules would take. This book takes the reader through the reasons for the new rules and the solutions that all potential contenders would have to consider if they wanted to win rallies at World Championship level. In particular, the subject of the book, Lancias Rally, was the car that was developed quickly to deal with the then-dominant Audi Quattro. The reasons it succeeded are featured here along with an in-depth, behind closed-doors, look at the development of the car with the close help and cooperation of its designer and chief engineer Ing. Sergio Limone. Here you can read how he decided the basic configuration of the car, what the rules would allow and how the project unfolded in total secret at Fiats various test tracks and centres in and around Turin overlaid with rumour and counter-rumour as the worlds motoring press tried to make sense of what little knowledge they could glean of the projects progress. In addition Ing. Limones own photographs from areas never allowed access to the public tell their own story. The story then moves to the world of top-level rallying, with all the associated glory and headaches. Accompanied by stunning photography and insights from team members, we follow the small and nimble 037s as the cars have become popularly known, as they head out to take the World Rally Championship for Makes in 1983 and innumerable wins throughout the world. In addition there are tests of various key examples of the cars and appendices of events and chassis used. Featuring many of Ing Limones own photographs during development and interviews with team members. Illustrated with 250 stunning and rare rally action photos.

Lancia Montecarlo was launched in 1975, as a