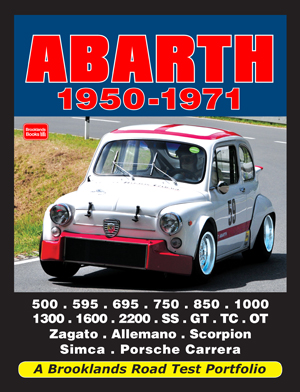 In just 22 years, Carlo Abarth managed to produce well over 200 different models of car bearing his name. On top of that, the special tuning parts which formed the backbone of his business went into huge numbers of other, more mundane, cars in order to turn them into something out of the ordinary.

Abarths business was in selling speed. By birth an Austrian, he set up his tuning shop in his adopted Italy during 1950, after a successful career in motorcycle racing. Abarth quickly recognised that all the affordable Italian cars of the time were mundane, and he capitalised on that by developing and marketing affordable accessories and conversions which gave them glamour through extra performance. Such was his success that, within five years, he was able to bring out his first complete car, the Tipo 207/A Spider.

Until the cost of a racing programme led to his companys liquidation in 1971, Abarth continued in the same vein. He produced accessories and more elaborate conversions for humble Fiats; he based some stunning special Coupes on Fiat mechanical elements which had benefited from his attentions; and he built a number of sports and racing specials. Such was the image of the Abarth name and its famous Scorpion badge that Fiat bought the rights to use both after 1971, and hot Fiats are now known as Abarth models.

Records of Abarth production no longer exist - if, indeed they ever did - and it is now almost impossible to establish how many examples of any particular Abarth were made, or indeed what the original specification of an individual car might have been. All this contributes to the mystery and glamour surrounding the Abarth name. The material in this book captures something of those qualities, and I am sure it will be welcomed by both confirmed Abarth enthusiasts and by those who are merely curious to learn more about the legend.

This book that sets out to reconstruct the story