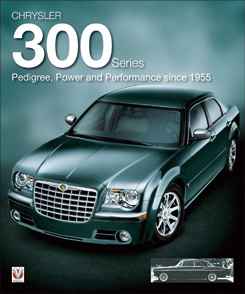 Pedigree, Power and Performance since 1955

This book is a must for enthusiasts of outstanding high-performance automobiles. It examines in detail all the great Chrysler 300 models from 1955 to the latest versions including the 425 horsepower 2005 300C SRT-8 model and the 300's running-mate, the 2005 Dodge Magnum. With hundreds of color and black & white photos, a carefully researched text, production and sales data and a year-by-year study of each Chrysler 300, this is a high quality book celebrating the origin and return to glory of one of America's most respected high performance automobiles. This carefully written and well illustrated book presents the history of one of America's greatest automobiles, the Chrysler 300. First produced from 1955 through 1965, it returned in 1998 as the front- wheel drive 300M. In 2004 a new rear-drive 300, available with a HEMI V-8 became an overnight sensation, attracting the attention of celebrities, sports stars, performance fans and automotive enthusiasts in record numbers. Every 300 model's features, performance, options and role in Chrysler history is examined in detail. Joining the book's accurate text are hundreds of illustrations, most in color, of every 300 model, along with close-up shots of their unique interior and exterior features. Highlights of the book's appendix include sales and production records and a review of the new 300's close relative, the 2005 Dodge Magnum.