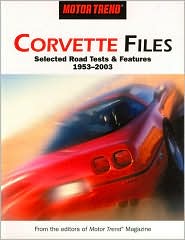 An American icon. At a time when British sports cars were attracting legions of car enthusiasts on both sides of the Atlantic, a new kind of automobile burst onto the scene: the Chevrolet Corvette. With a throaty rumble, scorching acceleration, and stirring looks, the Vette quickly became the it car for those drivers who had a need for speed and style. Fifty years later, Corvettes continue to attract fans, with top-notch performance and cutting edge design that make it a car like no other. This collection of Magazine articles chronicles every step of the cars evolution, giving die-hard Corvette fans road test data, model specifications, and more.