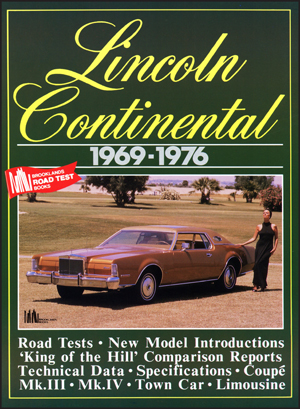 The restyled 1961 Continental was a massive success and remained so until a new range was introduced in 1969. Now designated the Mk III, this car had a new design engine, a V8 460 cu in to meet the exhaust emission control standards. The car was set head to head with the Cadillac Eldorado in the luxury car market. The Mk IV, introduced in 1972, grew 4 ins overall. The styling was updated and the engine modified for stricter emission controls. This is a book of contemporary road & comparison tests, new model intros & drivers impressions. Models covered: Mk III, IV, Town Car, Town Coupe & Limousine.

By the end of the 1950s, the Lincoln marque was