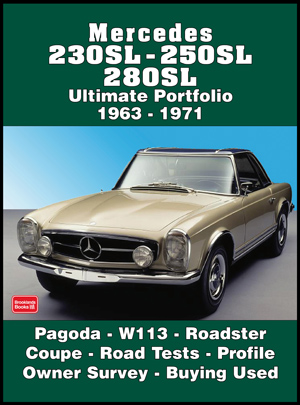 The Mercedes-Benz W113 sports cars were introduced in 1963 and remained in production until 1971. They were known as the pagoda range SLs and were fitted with inline six-cylinder engines. The 230SL made its debut at the Geneva Show in 1963 and three years later it gave way to the 250SL, which was followed in 1967 by the 280SL. Included are road and comparison tests, new model reports plus full technical and performance data. Roadster and coupe versions of the 230SL, 250SL & 280SLs are covered and advice is given on acquiring a good used example. A total of 192 pages, with 16 in colour.

Mercedes introduced the 190 in 1954 with pexiglass