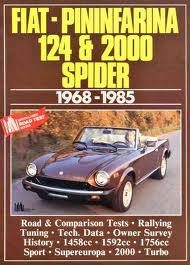 The 124 Spider was based on a shortened Fiat 124 floorpan and never officially imported into Britain. It could have been a rival to the MGB and with a production run of 190,000 came close to matching the Abingdon total. In 1974 it was produced exclusively for the American market. In 1979 it became known as the Spider 2000 with the bigger engine and was available with a turbocharged engine in 1981. Fiat withdrew the car from America in 1982. Pininfarina took over the production and it was renamed the Spidereuropa but it was still a slow seller and finally ceased in 1985. This is a book of contemporary road and comparison tests, specification and technical data, drivers impressions, new model introductions, background. Models covered include: 1438cc, 1608cc, 1756cc, 124 Abarth Rally, 1995cc, Turbo, Azzurra, Spidereuropa.