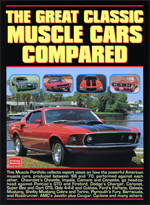 The golden era of the muscle car was that brief, but oh so exciting period in the later 1960s when performance was everything! The name of the game was speed and acceleration, winning it required awesome amounts of horsepower and this came from a number of mega cubic inch V8 engines installed in a legendary group of cars that became instant classics. Although tyre-shredding V8s had been around since the early 1950s, it was Pontiac who set the formula for the true Sixties muscle car by dropping a 389 cu.in. engine into a mid-size 1964 Tempest and calling it a GTO. Initial factory estimates put the likely production total at an almost trifling 5,000 units, but at the years end 32,450 GTO Tempests had been sold Affectionately dubbed The Goat the car developed a cult following and its success soon persuaded all the other manufacturers to come up with similar models - the race was on! When this new breed of performance machines exploded onto the streets they brought with them a whole new vocabulary. Model names reflected their aggressive body styling and blistering speed capabilities - Comet Cyclone, Sport Fury, Rebel, Charger and so on. And with Pontiac setting the pace with its GTO nomenclature, the others followed suit with a bewildering array of designations: Plymouth used GTX, Dodge R/T, Buick GS, Chevrolet had RS and SS, while even small independent American Motors got in on the act with their Javelin SST. But ultimately it was all about horsepower, and engines such as the mighty Chrysler 426 cu.in. Hemi have since assumed almost mystical status for the amount of sheer grunt they put under the driver’s right foot. The combination of such powerplants in relatively inexpensive cars equipped with drum brakes, soft suspension and skinny cross-ply tyres wasnt exactly designed to promote good handling, but what the heck, it sure was fun in a straight line! The fun couldnt last, of course. As the 1970s dawned, insurance premiums for muscle cars jumped alarmingly, increased legislation progressively strangled performance and the fuel crisis led to buyers demanding more economical cars. The muscle car disappeared from the manufacturers’ catalogues almost as quickly as it did down the highway. However, thanks to the collection of contemporary reports reproduced in this book, youll be able to relive those wonderful days when these great muscle machines first went head to head to see who was the quickest and fastest. This book collects expert views on how the powerful American muscle cars, between 66 & 70, performed against each other. Chevelle, Impala, Camaro, Corvette, GTO, Firebird, Charger, Coronet, Super Bee, Dart, 4-4-2, Cutlass, Fairlane, Galaxie, Mustang, Shelby, Cobra, Torino, Fury, Cuda, Roadrunner, Javelin, Cougar, Cyclone & more.

The Complete Book of Classic Dodge and Plymouth Muscle