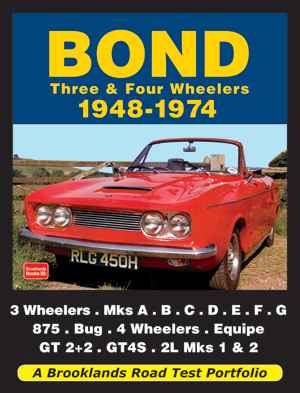 The man who gave his name to a series of small three-wheeled vehicles that were designed to provide economical transportation in the austere period that followed World War Two was Lawrence Lawrie Bond (1907-1974). After serving his apprenticeship at lorry manufacturers Atkinson & Co, Lawrie Bond worked for Meadows the engine and gearbox specialists and then went to Blackburn Aircraft as a design engineer.

By 1944, The Bond Aircraft and Engineering Company (Blackpool) Ltd had been established. This was a small engineering concern with less than 30 employees that produced component parts for vehicles and aeroplanes. When the war ended and government contracts dried up Lawrie Bond turned his attention to designing and building a series of small racing cars. However, in 1948 he built a prototype three-wheeler runabout that gained a lot of coverage in the national press which generated a large number of enquiries.

Realising that his modest workshop was unable to satisfy the demand for his little car, Lawrie Bond arranged for Sharps Commercials of Preston to take on the manufacturing. Modifications were made to the original design and production began in January 1949, with output quickly reaching 15 Bond Minicars a week. A revised Mk B Minicar was introduced in July 1951, but it was the arrival of the totally redesigned Mk C in 1952 accompanied by an extensive advertising campaign that set the future trend for Bond three-wheelers. Restyled models appeared on a regular basis, but the Minicar story ended with the Mk G in 1966 after a combined total of around 26,500 had been built.

In the meantime, Sharps Commercials entered the four-wheeled car market by announcing the Triumph-based Bond Equipe GT in May 1963. Lawrie Bond did the initial body design and then worked with Sharp’s chief development engineer Alan Pounder on getting the car approved by Standard-Triumph. It was also during 1963 that the company name changed to Bond Cars Ltd.

Lawrie Bond next acted as a consultant on the Bond 875, the Hillman Imp powered three-wheeler intended to compete with Reliant, but this project was beset with problems. Production of the 875 eventually got underway in June 1966 but the cars build quality attracted considerable criticism.

The fate of Bond Cars Ltd. was sealed in February 1969 when the company was bought by Reliant. Although production of the Equipe and 875 continued into 1970 and the Bond Bug was launched in June that year with a blaze of publicity, the writing was on the wall. In July 1970 Reliant announced that the Preston works would be closed and Bond Bug production was transferred to its Tamworth factory. When the Bug model was withdrawn in 1974 the Bond name disappeared.

This portfolio reports on the Bond three-wheelers Mks A, B, C, D, E, F, G, the 875 and the Bug. Plus the four-wheeler Triumph based Equipes - GT 2+2, GT4S, and the 2 litre Mks 1 & 2. The driving force behind these successful cars, built between 1948 and 1974, was engineer and entrepreneur Lawrie Bond. Included are road and comparison tests, new model introductions and updates plus technical and performance data. Advice is offered on acquiring a good pre-owned Equipe. A total of 160 fully illustrated pages.