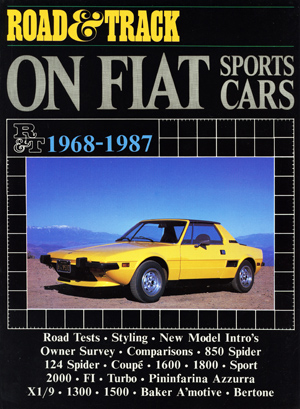 Buying a Dino is inexpensive (pristine 1967 examples would auction for about $16,000 in the United States in 2001), and the cars are relatively reliable. They are however expensive to maintain firstly because of the scarcity of parts and secondly due to the rarity of mechanical knowledge of the marque. The Dino was never sold officially in the United States, although many were imported. Production came to an end in 1973.

This portfolio draws on articles from three continents and covers the desirable Ferrari powered Dinos built between 1968 and 1973. Reported on are the Bertone bodied coupes and the Pininfarina spiders fitted with 2.0 and 2.4 DOHC V6 engines. Included are road tests, new model reports, driving impressions, full technical and performance data plus advice on acquiring a good pre-owned Dino. With a total of 104 fully illustrated pages.

I still remember my first drive in an X1/9, a

Fiats 124 Spider was introduced to the world in