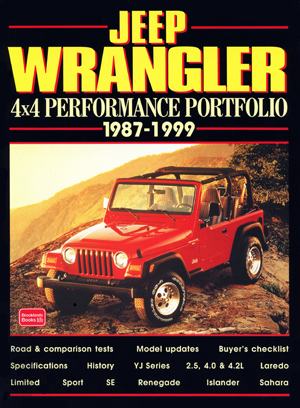 When the successor to the immortal CJ Jeeps was being designed in the early 1980s, market conditions were very different from what they had once been. While the CJs had been primarily designed as utility vehicles and had then been adopted as everyday transport, the new model was going to be bought mainly for everyday use and not as a utility vehicle at all. This was one reason why the new YJ model, introduced in May 1986, did not take the next number in the CJ series but was given a name instead. Nevertheless, the Wrangler was very much in the mould of the CJs, having a basic open tub body with only occasional seating for four. While it retained the traditional body-on-frame construction, its chassis components were nevertheless biased heavily towards road use. The standard low-profile tyres, for example, may not have been best for off-road use, but they did improve the handling. Jeep reasoned that those who were really serious about going off-road could always buy a spare set of wheels and tyres. The trend continued when the original YJ Wrangler gave way to the redesigned TJ model in 1996. This time, the traditional leaf springs had given way to coil springs all round as a concession to ride comfort - and the rather less spartan interior came with airbags as standard. It was all a far cry from the wartime MB which had established the Jeep name and was the ancestor of all the CJ-style models. The articles reproduced here show that the Wrangler was taken as it was intended - as a vehicle suitable for everyday use but with a substantial fun element as part of the deal. While traditional CJ enthusiasts tended to decry the YJ and TJ, that fun element allowed the models to appeal to a new breed of buyer - and annual sales rose way beyond the figures achieved by the CJs. Models covered: YJ, Laredo, Sahara, Renegade, S, Islander, Sport, TJ & SE. 140 pages, 400 illus.

The successor to the CJ-7, re-designed and highly