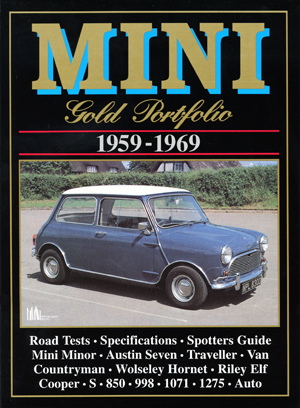 The first article reproduced in this book is entitled BMC's Brilliant New Baby, and those words aptly sum up reactions to the Mini when it was launched in 1959. The car was brilliant - a triumph of packaging by its designer Alec Issigonis, and at the same time a thoroughly driveable and likeable economy car. Its chubby styling immediately gave it much more character than any other economy car of the time, and the car quickly became a fashion accessory as well as a practical means of transport. During the 1960s, it became a powerful statement of style - and would that other style statement of the 1960s, the mini-skirt, have got its name if the Mini had not been there first? It was BMC's practice at the time to indulge in badge-engineering, and so the Mini went on from being a Morris Mini-Minor and an Austin Se7en (as they spelt it) to gain a boot and become a Riley Elf and a Wolseley Hornet. But neither of these cars had quite the same character as the original, and their styling died along with their names at the end of the 1960s. Much more successful were competition versions of the Mini, spearheaded of course by the Mini Cooper. Today, it still sells strongly as a new car, and has the immense benefit of a large aftermarket infrastructure for those who are enthusiastic about the older models. Long may it continue. Models covered: De Luxe, Austin 850, Estate, Wolseley Hornet, Riley Elf, Mini Cooper, Super De Luxe, Cooper S, Riley Elf Mk II, Viking Hornet Sport, Van, De Luxe Automatic, 1,000, Mk II & Mk III. 176 pages, 400 illus. SB.

When Alec Issigonis designed the Mini, his

A worthy addition to the Haynes Great Cars Series,