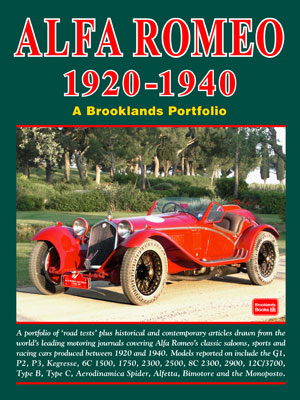 The company that became Alfa Romeo in 1920 was founded as Societa Anonima Italiana Darracq (SAID) in 1906 by the French automobile firm of Alexandre Darracq with the backing of some Italian investors. Sales slowed of these Italian Darracq's and subsequently in 1909 a new company was founded named A.L.F.A. (Anonima Lombarda Fabbrica Automobili), initially still in partnership with Darracq. The first non-Darracq car, produced in 1910 by ALFA was the 24 HP, designed by their new employee, Giuseppe Merosi. It was a winner and sold 50 cars in its first year. In August 1915 the company came under the direction of Neapolitan entrepreneur Nicola Romeo, who, in 1915, went over to produce military hardware for the Italian and Allied war efforts.

In 1920, the company name was changed to Alfa Romeo and car production started again with the Torpedo 20-30 HP which became the first car to carry the new logo. Their first success came that year when Giuseppe Campari won at Mugello and continued with second place in the Targa Florio driven by Enzo Ferrari. Giuseppe Merosi continued as head designer, and the company continued to produce solid road cars as well as successful race cars (including the 40-60 HP and the RL Targa Florio).

In 1923 Vittorio Jano was lured away from Fiat, partly thanks to the persuasion of a young Alfa racing driver named Enzo Ferrari. He replaced Merosi as chief designer, who went on to Isotta Fraschini. The first Alfa Romeo under Jano was the P2 Grand Prix car, which in 1925 won the inaugural world championship for Grand Prix cars. For Alfa road cars Jano developed a series of small-to-medium-displacement 4-, 6-, and 8-cylinder inline power plants based on the P2 unit that established the classic architecture of Alfa engines. They featured light alloy construction, hemispherical combustion chambers, centrally located plugs, two rows of overhead valves per cylinder bank and dual overhead cams. These designs proved to be both reliable and powerful.

Enzo Ferrari turned out to be a better team manager than driver, and when the factory team was privatised, it became Scuderia Ferrari. When Ferrari left Alfa Romeo, he went on to manufacture his own cars. Tazio Nuvolari often drove for Alfa during this period, winning many races for them prior to the Second World War.

In 1928 Nicola Romeo left Alfa which soon afterwards went bankrupt when their defence contracts came to an end. Late in 1932 Alfa Romeo was rescued by the Italian government which took over effective control and Alfa which subsequently became a national emblem. During this period the company produced wonderfully successful sports cars which for many years excelled at Le Mans and built beautiful bespoke vehicles for the wealthy. The elegant bodies for these models were normally built by Touring of Milan or Carrozzeria Pinin Farina and era peaked with the legendary Alfa Romeo 2900B Type 35 racers. To put production figures into perspective, in the six years between 1934 and 1939, Alfa Romeo built 1994 cars, an average of 332 a year, a little less than one a day.

The volume traces the history of Alfa Romeo, the

Book produced by Alfa Romeo to accompany the