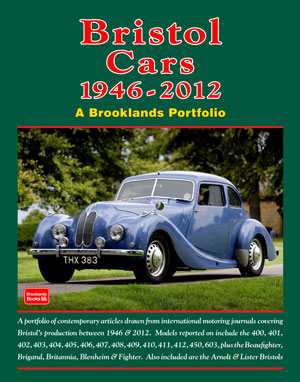 A portfolio of 138 articles drawn from international motoring magazines covering Bristol’s production between 1946 and 2012, which include new model reports, racing, road and comparison tests, technical data, touring, comparison tests. Plus a recollection by Tony Crook, a name synonymous with Bristol Cars and a few words by Sir George White about the background and history of the company for our introductory pages. Models covered: 400, 401, 402, 403, 404, 405, 406, 407, 408, 409, 410, 411, 412, 450, 603, Beaufighter, Brigand, Britannia, Blenheim, Fighter, Arnold & Lister Bristols. With 368 pages with 94 in colour, plus approx 600 B & W illustrations. Bristol Cars began life in 1945 as the Car and Light Engineering Division of the Bristol Aeroplane Company. It was the modest offshoot of an aeronautical giant. The Aeroplane Company had been founded as a family business by Sir George White 1st Bt. (1854-1916) in 1910. Sir George was a self-made entrepreneur, pioneer of electric trams and the first man in Great Britain to put the manufacture of aircraft on a properly funded industrial footing. "We will win by quality", Sir George told his workforce in 1916. Quality was his watchword, and had been the basis of his life's work. Sir George as a young man had been a protege of William Butler (d. 1900) an earlier West Country entrepreneur, who had learnt his business skills while in the employment of Isambard Kingdom Brunel (1806-1859). Brunel had himself been pupil to two of the greatest European engineers of all time, the French watchmaker Abraham-Louis Breguet (1747-1823) and the English inventor and tool-maker Henry Maudslay (1771-1831).

With such a history of perfection, ingenuity and integrity behind them, Sir George and his family would accept nothing but the best in the output of the aircraft factory. This, in the early years of Bristol Cars consisted of a vast range of products, from airliners, military aircraft and missiles, to plastics and aluminium housing. Certainly Sir George's grandson, George S.M. White (1913-1983), who had inspired the formation of the Car Division in the early 1940's and ran it from 1946 onwards, would not allow a single car to leave the factory unless he believed it to be perfect. Mergers forced by Government policy led to the break up of the Bristol Aeroplane Company in 1959. Its airframe interests became part of the British Aircraft Corporation, the work of its design team forming the basis for Concorde. Its engine works, together with the great Bristol Olympus and Pegasus jet engines was merged to form Bristol Siddeley. George S.M. White, (later Sir George White 3rd Bt) purchased Bristol Cars in partnership with Anthony Crook, who until then had been a notable Bristol agent and successful driver of Bristol cars in competition.

A catastrophic car accident led to Sir George's retirement from the Company and the sale of his controlling interest in 1973. Its early reputation however carried it on through the ownership of Anthony Crook. Sold again in 2002 Bristol Cars momentarily lost its footing and in 2011, found itself in administration. Many predicted that this great British institution had reached its end, but they were wrong. Now in the ownership of Frazer Nash Research, another company noted for its ingenuity and integrity, Bristol Cars is set for international revival. The high-powered electric drive train, devised by Frazer Nash Research and destined for the next new Bristol, not only takes the company history full-circle to the pioneering days of the first Sir George and his electric transport systems, but promises a car of exceptional torque, range, speed and exceptional quality. As newly appointed consultants to the company, my wife and I are immensely pleased that the White family is associated once again with Bristol Cars. We look forward with the utmost confidence and excitement to the future. A total of 368 fully illustrated colour and black & white pages.

This is the largest and most detailed encyclopedic

First manufactured in 1946 and still produced

No-one has written a book exclusively on this

This book is about Solex Carburetters and