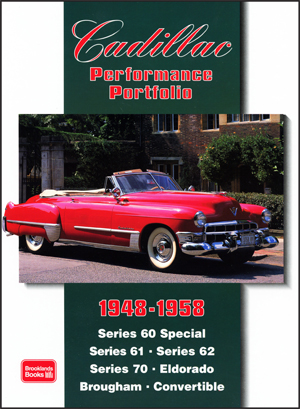 The name Cadillac has always represented the ultimate in luxury motoring. Automobiles bearing the famous coat of arms of French explorer Antione de la Mothe Cadillac were also regarded as being manufactured to the highest specification, with a quality of workmanship that few others could match. Performance was usually a secondary consideration. That all changed with the introduction of the 1949 Cadillac models, thanks to a new generation of high-compression, overhead valve V8 engines. The modern, postwar design featured lighter construction, a shorter stroke and better breathing than before, which added up to 160 horsepower from 331 cubic inches. While the power output figures might seem nothing to write home about these days, it was sufficient to enable a Cadillac to reach 60mph in only 13 seconds. Being at the forefront of engine development in this manner enabled Cadillac to establish a reputation for performance that would last for many years to come. Cadillac engines became the choice of racers because they were thought to be more carefully assembled at the factory, using closely matched precision components to generate superior horsepower numbers. Throughout the Fifties, Cadillac engine power output grew in parallel to the ever higher tailfins on the cars themselves. By 1958, the standard 365 cubic inch V8 was delivering 310bhp, almost double that of a decade earlier. There was also an optional 335 horsepower Eldorado engine with triple two-barrel carburettors available. And, although by the late 1950s a Cadillac was undoubtedly bigger, heavier and more ornate than its predecessors, its zero to 60mph time had been cut to 11 seconds. However, such were the improvements being made by other manufacturers, Cadillac was no longer ahead of the field. A spokesman for the company justified this situation by stating: We arent building cars for drag racing. We feel our cars offer all the performance their drivers need and can use with safety. While Cadillac might have been overtaken in the race for greater pace, it retained its pre-eminence where quality was concerned. In other words, although some cars might be slightly faster, only a Cadillac could deliver the performance with such luxury and style. This book traces the progress of the post-war 60, 61, 62 & 70 Series. 47 articles feature road tests & intros. Models covered: 60, 61, 62 & 70 Series, Coupe de Ville, Fleetwood & Eldorado Brougham.

Never before has the Cadillac automobile been so

Cadillacs: The Tail Fin Years, is an in-depth look