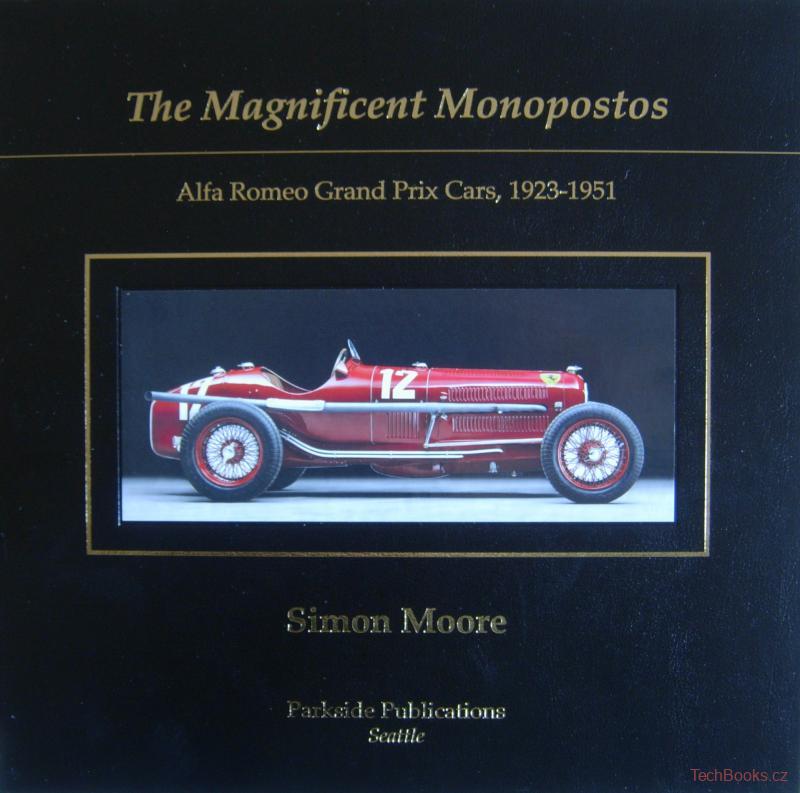 The third book in Simon Moore’s Alfa Romeo trilogy is finally here! Simon’s first book, The Immortal 2.9, covered the famous 8C2900 models of the late 1930s and won the coveted Cugnot Award from the Society of Automotive Historians as the best automotive book of 1986. His second book, The Legendary 2.3, covered the 1931-1934 8C2300 model and was awarded the prestigious Prix Bellecour in France in 2000. The 2.9 book has since been completely rewritten and a Revised Edition was published in 2008. Both books are still available. Simon started this new book with the intention of covering just the single seaters from 1931 to 1940. However, he discovered so many previously unpublished photographs from the 1923 to 1930 era that he decided to cover those years as well. The publisher then persuaded him to expand the book further to cover the exploits of the Tipo 158/9 up until Alfa’s retirement from Grand Prix racing in 1951. The prewar racing history of the 158 cars in the voiturette category is covered in detail. The postwar period is covered with a huge number of previously unpublished photographs and technical notes rather than covering each race in detail which has already been covered in several books. Simon was, however, given access to the Alfa Corse records which give chassis and engine number details by race and they are included in tables.As usual, Simon has used his phenomenal detective skills to trace the history of the individual cars, including those that were sold to private owners by the factory and Scuderia Ferrari. Each car is given a chapter of its own. The cars traveled all over the world, including the USA (three ran at Indianapolis), Brazil, Argentina, Australia and New Zealand. Some retained their original engines, drive train and suspension, but many were given alternative motive power – one even acquired a Ford V8 for drag racing in California!
Sadly, Michel Poberejsky (who raced as “Mike Sparken”) died before the book was finished. However, he recorded for Simon the complete story of how he managed to acquire, restore and run the only Tipo 158/9 that has ever left the factory. The extensive content of this book required 836 pages split into two volumes. The first essentially covers the cars from the “cart sprung” era, beginning in 1923 and ending with the Tipo B and that twin engine monster, the Bimotore. The second volume concentrates on the independentlysprung cars of the later 1930s. The historic photos in the book are interesting on two distinct levels. First, by tracing the history of the racing efforts of Alfa and its competitors, they graphically illustrate the evolution of the racing automobile. However, they also serve a second purpose: they provide a very evocative glimpse into the glamour, style, informality and ambiance of the early European Grand Prix racing scene, especially during the 1930s. Those gatherings became the highlight of the summer social season in many cities. The details in the background of many photos thus become as interesting as the automobiles in the foreground. The large crowds, the beautiful people, the stylish clothing, the art deco imageryof the 1930s – all present an exciting backdrop for the exotic machinery and daring drivers who achieved Alfa’s Grand Prix conquests.
Simon has also included a section on some cars that never raced, like the late-1930s Ricart designs and a fascinating chapter on the racing boats powered by Grand Prix Alfa Romeo engines. Naturally there are sections on numbers and rumours of missing cars as well as technical notes, which include dyno test sheets for the original Tipo 158 and the complex sixteen cylinder car that finished 2nd and 4th in the 1938 Italian Grand Prix. Like all books from Parkside, The Magnificent Monopostos is produced to the highest standards, using fine matte paper and bonded leather binding. All of the 1140 photographs are spot-varnished. All black and white photos are reproduced in duotone and some period images are presented in their original sepia format. Some rare prewar colour photos are included, as well as contemporary colour photos of all the cars surviving today. Simon’s first two books focussed upon both the racing history and the spectacular coachwork of the 2.3 and 2.9 cars. Consequently the audience for those books has proven to be substantial. However, The Magnificent Monopostos is NOT about coachwork, just racing. Consequently we have only printed 1000 copies, well under half the number printed of the other two books in the trilogy.
Autorem signovaný exemplář!

The Revised Edition of The Immortal 2.9 is finally