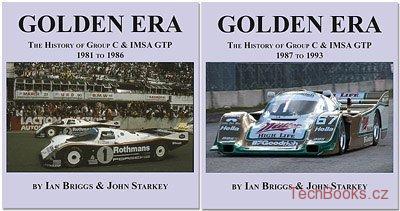 After the great sports prototype era of 1962 through to 1971, auto racing fell back on the use of GT machinery until, with the coming of the 80's , a new golden era commenced on both sides of the Atlantic. In Europe, the new Group C regulations set in motion a series which was ruled by fuel efficiency as well as speed. In America, the fuel efficiency factor was disregarded - brute power, speed and close racing being the objective in endurance racing. From 1981, IMSA GTP racing in America saw first Lola and then March rule the roost. The coming of the Porsche 962 in 1985 saw this car dominate the series until the arrival of Nissan and later Toyota. From 1982 in Europe, Porsche was instantly dominant, first of all with the 956 and later with the 962. There, Mercedes, in the guise of Peter Sauber's Company and Jaguar (with Tom Walkinshaw Racing) would beat Porsche until a new 3.5-liter "atmo" class took over in 1991. With the coming of the Wold recession in the early 90's, this form of manufacturer-based racing ground to a halt. Sports prototype racing in Europe died in 1992, to be followed in America at the end of 1993. Today, these cars and races are remembered with great fondness by most racing enthusiasts around the World. In this book (set of books actually) can be traced the events leading up to the Group C and IMSA GT formulas, together with a description of every race of both series and a complete description of every car that raced in the series. 300 black and white and color photos. 2 volume set.

'Sportscar fans are in for a real treat

This is the sixth Le Mans title in our series