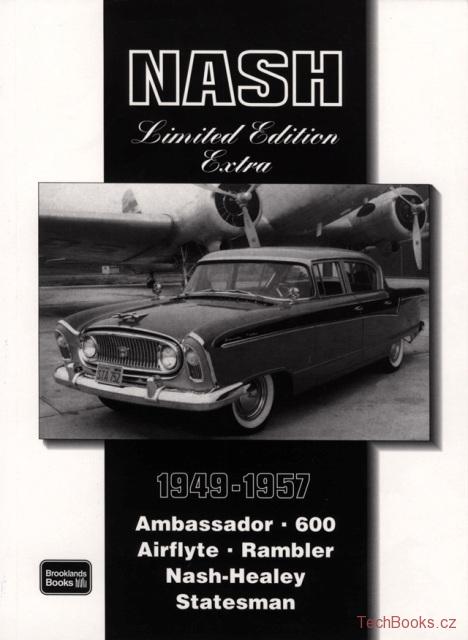 Readers will be able to trace the progress of Nash models over their final 9 years of production from the notes that follow. We hope you find the facts interesting, revealing and entertaining. 1949: Nash in their 1949 advertising promised, cockpit control and airplane-type seat’. This combined with genuinely dynamic Airflyte type styling stunned the public. Also introduced in 1949 were new two-door models, a one-piece curved windscreen, new Uniscope instrument panel and twin-convertible beds on the two-door sedans. Production climbed to 133,328 cars. 1950: There were few changes for 1950, however the inverted bath-tub design introduced in 1949, which caused some hilarity, sold well. Nash’s aerodynamic drag rating proves best in the industry. The Ambassador, their top model, is powered by their six cylinder ohv 234.8-cid engine and became available with Hydra-Matic transmission. The Statesman with 85bhp replaces the 600 series. All Airflytes now have reclining front seat backs. The Rambler compact is introduced with 100-inch wheel base. This year proves to be Nashs best sales season ever with 191,875 cars sold, of these 11,400 are Ramblers. 1951: Rambler range is extended to include the Country Club hard top coupe, however wagons are still the best sellers. The larger Nashs come in Super and Custom trim and the bath-tub models loose their bustle rears. Nash brags that the Airflyte line is the world's most modern car and claims 25mpg for the Statesman. The Nash-Healey sportscar is announced with bodywork designed in England by Donald Healey on a Nash chassis. Production of the larger cars declines but the slack is taken up by increased Rambler output. 1952: Many changes in Nash line-up - the big cars drop the bath-tub look and adopt Pinin-Farina styling, Duel-Range Hydra-Matic transmission and Solex tinted glass is offered. Golden Airflyte Nashs mark the company's 50th anniversary. The Nash-Healey is also restyled by Pinin-Farina and are assembled in Italy, built on a US chassis and tuned by Healey in England. The new model is introduced at the Chicago Autoshow in 1952 and wins a class award at Le Mans later that year. 1953: The recent success at Le Mans inspires a Nash Le Mans option for Ambassadors which now include dual carburettors and a high compression head. A Le Mans coupe body joins the Nash-Healey convertible which goes on to win success at the Italian International Concourse d'Elegance. Nash production declines to 121,739 cars. 1954: Nash-Kelvinator and the Hudson Motor Car Co. merge on May 1st to form American Motors Corp. This is viewed as a Nash take-over of Hudson and Nash-Healey production comes to an end. Four-door sedans and wagons join the Rambler line. The British made Metropolitan is introduced with about 14,000 vehicles arriving before the end of the year. 1955: This is the year of rationalisation with Hudsons adopting Nash bodyshells and Ramblers and Metropolitans wearing both Nash and Hudson badges. Shipment of Metropolitans dive to about 6,000. 1956: Complete redesign of the Rambler line, which now have four doors on a wheelbase of 108-inches and adopts an ohv engine. Rambler sets transcontinental economy record at 32mpg - less than a cent per mile. 1957: Nash name used for last time as full sized models start final season with the Ambassador getting a major restyle. Ramblers drop Nash and Hudson names. A portfolio of automotive articles drawn from contemporary magazines covering road & comparison tests, new model intros, driving impressions & performance. Models covered: Ambassador, Statesman, Rambler, Airflyte, 600 & Anglo-American Nash-Healey sportscar.

Capturing the history of Nash from the cars of the

Among its many innovations were: fresh air heating

This is the story of two American car marques,