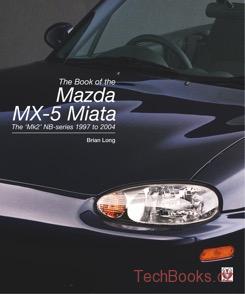 • Definitive history of the second generation Mazda MX-5 Miata.
• Sales in all major markets covered in detail.
• Written by a recognized authority on the subject.
• Limited editions covered from around the world.
• Written with the full co-operation of the factory.
• Interviews with key staff members.
• Detailed production figures, including exports.
• Revised version of a celebrated book focusing on the NB cars.
• Contemporary photography to help owners with authenticity issues.
• The author is a past owner of the MX-5 and other Mazdas.

The definitive history of the second generation Mazda MX-5, which was also known as the Miata or the Roadster. The book focuses on the NB-series – covering all major markets of the world, and using stunning contemporary photography.

Researched and written in Japan with the full co-operation of the factory, this book is the definitive story of the second generation of Mazda's MX-5 – the car that re-invented the affordable lightweight roadster, a species that was thought to be extinct as the 1990s drew near.
Successful immediately, the MX-5 (also known as the Miata, or Roadster) spawned many imitators, but remains the world's biggest selling sports car. The series has now been in production for almost 30 years, with new generations following the concept of the original, much to the delight of fans all over the world.

Features • The definitive history of the original