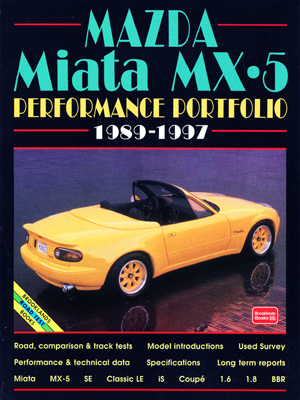 The affordable British sports car had been killed off around the turn of the Eighties when the last models bearing MG and Triumph badges rolled off the assembly lines, and many people believed then that the roadster was dead. Nevertheless, the demand for such cars remained high, and nowhere more so than in the USA which had once taken so many cars of the type. In Japan, Mazda's product planners recognised an opportunity - and seized it with both hands. The company put together a remarkable package which both drew on those great British roadsters of the past and also successfully updated the concept behind them without destroying its charm. Its styling was unashamedly inspired by that of the original Lotus Elan, while little details such as the click of the gearshift were copied carefully from cars like the MGB. There was even some genuine British input, because the IAD design consultancy was involved in bringing the handling up to scratch. Pricing was carefully calculated to ensure that the new car would hit its target market right in the bullseye. On the Japanese market, the car was called a Eunos Roadster; for the USA it became a Miata; and in most other markets it was called simply an MX-5. It became a huge success as soon as it was announced in 1989, and the only complaint regularly heard was that it could readily handle more power than the 118bhp from its four-valve 1,598cc engine. Not surprisingly, tuning companies quickly obliged, and in Britain the Mazda importers gave their full approval to a turbo conversion by Brodie Brittain Racing which boosted power to 150bhp. Cars like the MX-5 demonstrated that the Japanese manufacturers knew precisely what they were doing by the end of the Eighties. Derided earlier as merely cheap copyists, they had discovered how to copy the essence of a product and combine it with modern technology of their own design to give it a multi-faceted appeal. That appeal comes across very strongly in the many contemporary reports reproduced in this book, which I am sure will be welcomed by MX-5 enthusiasts everywhere. This is a book of contemporary road & comparison tests, driver's impressions, racing & buying used. Models covered: MX-5, Miata, Racing Dynamics, SE, LE, 1.8, PFS SC, M-Edition & 1.8iS.

Arguably, the Mazda MX-5 was single-handedly

Mazda really created a storm in the international

The Mazda MX-5 created a sensation when it was