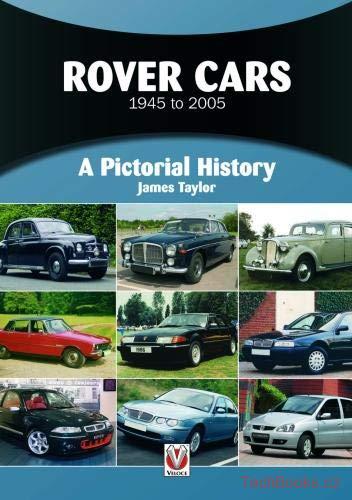 This comprehensive pictorial overview of Rover cars covers 1945-2005 models. It describes and illustrates all the great classic Rovers up to and including the SD1, British Leyland models with Rover badges, the models designed in conjunction with Honda, the later British-designed cars and, finally, the little-known City Rover.

This comprehensive pictorial overview of Rover cars and car-derived vans covers the 60 years from 1945 to 2005. It describes and illustrates all the great classic Rovers up to and including the SD1, and goes on to look at the models inherited from British Leyland that attracted Rover badges. It finishes with the models designed in conjunction with Honda and with the later British-designed cars  and even the final City Rover. There is also some consideration of some Rover models that were designed but, for various reasons, did not enter production and can now only be seen as prototypes in museums.
One of Veloces popular Pictorial History series, this book describes all the postwar models with illustrations and technical data for each one.

Introduced in 1949, the Rover P4 represented

Rover's big hatchback saloon of the 1970s and

The latest edition of this detailed study of the

• Origins of the engine at General Motors•