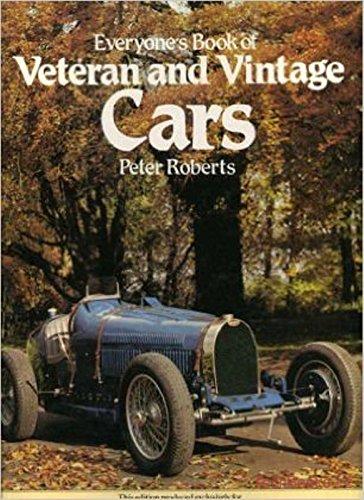 THE INTEREST in veteran and vintage cars is growing day by day. As the cars that were made in the latter days of the nineteenth century and the early days of the present century become more scarce, more legend-ary and more valuable they become more and more sought after. Today, the vehicles have a beauty of their own. For those who know it, the story of the men who built them and the people who first drove and rode in them has a romantic fascination. In this wide ranging book PETER ROBERTS has captured the lively spirit of those pioneer days of motoring. In these pages you will find the spidery vehicles of the genesis of motoring, and the colour and tradition of graceful and leisurely Edwardian days. Here, too, are the great names of the past, the fashions dictated by early motoring, the changing laws which governed the motor car's development and the stories of the intrepid men to whom speed was yet another ele-ment to conquer. Development and continual change have always marked the motor industry; some of the simple engines of the turn of the century were only the size of a large cocoa tin, some of the power units of the 'twenties were the size of half a dozen modern engines. Examples of almost every type of car appear in the hundreds of illustrations in black and white and the thirty-two pages of plates in rich colour. This is a book to delight anyone who has ever been caught by the fascinating beauty of the early motor car. Its pages form a motorcade as colourful and exciting as any veteran or vintage rally ever held. It is a sincere tribute to the automobilists of the past and the growing band of modern enthusiasts. Every aficionado of veteran and vintage days will want to have it on his own bookshelf.

Highlights from American automobile design of the