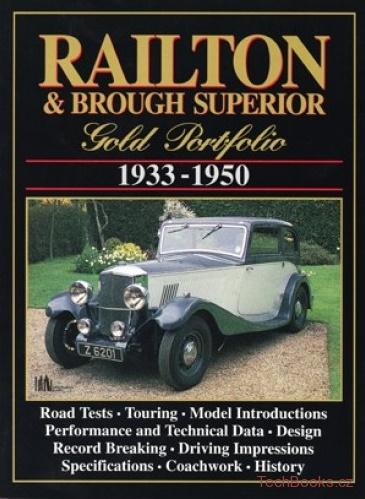 The first Railtons were produced in 1933 from the remnants of the old Invicta company, the basis was a Hudson Terraplane chassis with a straight 8 engine. 1935 was the peak of production using the Hudson 54 series chassis. Bodies were of a great variety from various coachbuilders and included three tourers and two coupes. Sales fell off in the years prior to the war as resources were put into producing a motor gunboat. There were only two post-war models and production ceased in 1950. The Brough Superior was first made in 1933 and in 1935 also based their cars on the 8-cylinder Hudson chassis. Changing later to the 6-cylinder chassis the cars finally ceased production in 1938. This is a book of contemporary road tests, technical and specification data, new model introductions, driver's reports, design, record breaking, coachwork & history. Models covered: Essex Terraplane, Napier-Railton, Railton Terraplane, Drop-head Coupe, Tourer, Sports, Light Sports, Saloon, Sandown, Cobham, Fairmile, 21HP, Brough Superior, 3.5L, Supercharged, Saloon & 12-cylinder. 172 pages, 450 illus.