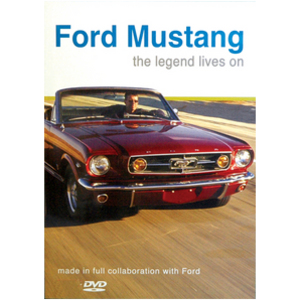 The Legend Lives On

The complete story of the Ford Mustang, from the iconic 60s classic through the latest model. Made under official license from Ford, this programme features archive and contemporary footage of the Mustang in action. Includes memorable Mustang adverts, footage from the production line, interviews and fantastic racing footage. Features the cars and festivities from the Mustang’s 40th anniversary celebrations in Nashville.

"Made to celebrate 40 years of the world's most popular American car, much of this DVD was shot at Nashville Speedway, Tennessee, during the pony's 40th birthday bash last year. Aerial shots, trackside footage and interviews with some of the owners, (including, it was gratifying to see, the owner of one complete shed) are backed up with interviews with Carroll Shelby, Mustang Chief Engineer Hau Tai-Tang & Ford VP Stephen Lyons. From the original prototype up to the then-brand-new 2005 Mustang, it was all on show and creating a stir. Incidentally, did you know that the Ford employee who designed the famous pony badge was from Billericay, Essex? Talking of Essex, there's plenty of footage from the Mustang Owner's club GB event at Dunton too, with our enthusiasts showing that British Mustangs are just as show-worthy as the Americans, plus interviews with a few familiar faces.

But the best parts of this DVD are the original Sixties Ford PR films, from an overview of the 1966 Ford range to a look at the 1965 Ford racing season, plus 'Flat Out Ford' and various other commercials. These are worth the price of the DVD alone, so make sure you check out the bonus features. Altogether there's just under two hours of top-quality entertainment for the myriad of Mustang fans out there, though to be honest, any Ford fanatic would find this well worth watching." Classic American