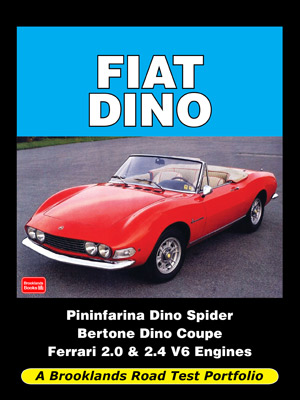 The Fiat Dino was a front-engined, rear-drive sports car manufactured from 1966 to 1973. It was an intermediate step towards creating Ferraris Dino and the two are often confused. The Fiat Dino allowed Ferrari to achieve the necessary production numbers to homologate Alfredo Ferraris V6 engine for Formula 2 racing. The Fiat Dino Spider was introduced at the Turin Motor Show in 1966 and the Coupe version followed a year later at the Geneva Motorshow.

Ferrari started its first line of mid-engined cars in 1968 and sold them under the brand name of Dino. The Dino 206 GT and Dino 246 GT & GTS were equipped with engines identical to those used in the Fiats; the later Dino 308 GT4 had an unrelated V8 and was rebranded Ferrari in 1976, thus ending the use of the Dino trademark.

The car was first offered with a 2.0-liter, 160 PS (118 kW; 158 hp) V-6, with a 5-speed manual transmission. This engine was later enlarged to a 2.4-liter, 180 PS (132 kW; 178 hp) V6 unit in 1969. The Fiat Dino was originally equipped with a live axle suspended by leaf springs, but later examples used a coil-sprung independent rear suspension similar to that of the Fiat 130. Performance was impressive, with a 0-60 mph time of less than 8 seconds. Fuel was delivered via three Weber 40DCNF carburetors. Two body designs were made for Fiat, a Pininfarina spider and a Bertone coupe, they also manufactured these cars.

Buying a Dino is inexpensive (pristine 1967 examples would auction for about $16,000 in the United States in 2001), and the cars are relatively reliable. They are however expensive to maintain firstly because of the scarcity of parts and secondly due to the rarity of mechanical knowledge of the marque. The Dino was never sold officially in the United States, although many were imported. Production came to an end in 1973.

This portfolio draws on articles from three continents and covers the desirable Ferrari powered Dinos built between 1968 and 1973. Reported on are the Bertone bodied coupes and the Pininfarina spiders fitted with 2.0 and 2.4 DOHC V6 engines. Included are road tests, new model reports, driving impressions, full technical and performance data plus advice on acquiring a good pre-owned Dino. With a total of 104 fully illustrated pages.