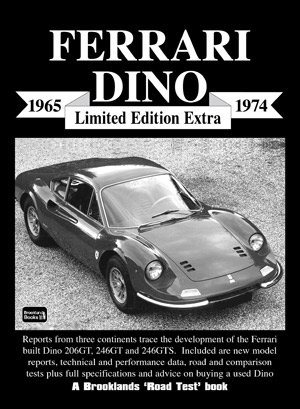 At the 1966 Turin Motor Show two Dinos were announced! One carried the Fiat name and was a roadster in the traditional sense with a Pininfarina body while the other was the Dino 206GT from Ferrari, also with a Pininfarina body. Ferraris Dino 206GT was a stunning piece of automotive art of perfect proportions and sensuous curves. Mounted transversely behind the driver, the 2.0-litre DOHC V6 drove the rear wheels through a 5-speed manual gearbox. Power output was an astonishing 180bhp at 8000rpm. When tested by Paul Frere for Motor in the January 25, 1969 issue he recorded a 0-60mph time of 7.5 seconds, a standing 1/4 mile time of 15.8 seconds and a maximum speed of 140mph. For the era such figures from a 2.0-litre GT car were outstanding. Ferrari was breaking another mould and tradition with a new badge system. It was no longer based on cylinder capacity but a combination of engine capacity and number of cylinders, with the Dino it was a 2.0 litre engine, 6-cylinders. Fiat increased the capacity of their Dino engine to 2.4-litres (it was announced at the 1969 Turin Show) in response to complaints about the lack of power and torque from the 2.0-litre engine. Ferrari, too, adopted the bigger engine for their Dino 246GT, power rising to 195bhp at 7700rpm, the acceleration time for the 0-60mph sprint falling to 7.1 seconds and the top speed rising to 148mph. It was faster than a 911S. In 1972 Ferrari quietly announced the Dino Spyder that featured a removable glass fibre panel in the roof that could be lifted out and stored behind the seats. It was the only variant from the original coupe offered. Ferrari ended production of the Dino 246GT in 1974 (even though it was still selling well) and replaced it with the Bertone designed Dino 308GT4. Just 3913 206/246GTs were built during its decade of life making it the most numerous Ferrari at the time. Ferrari remained true to his intentions and never fitted the hallowed Ferrari name badge nor the prancing horse badge to the car although doubtless some owners have done so since. The original Dino was a stunning automotive masterpiece from Ferrari and Pininfarina and has gone on to become one of the most popular, affordable and collectible of all Ferrari models. Models covered: 206GT, 246GT, 246GTS & pre-production prototypes. 136 pages, 350 illus.

Guide to the development of individual models Dino