Úvod »Modely a sběratelství» The British are Coming 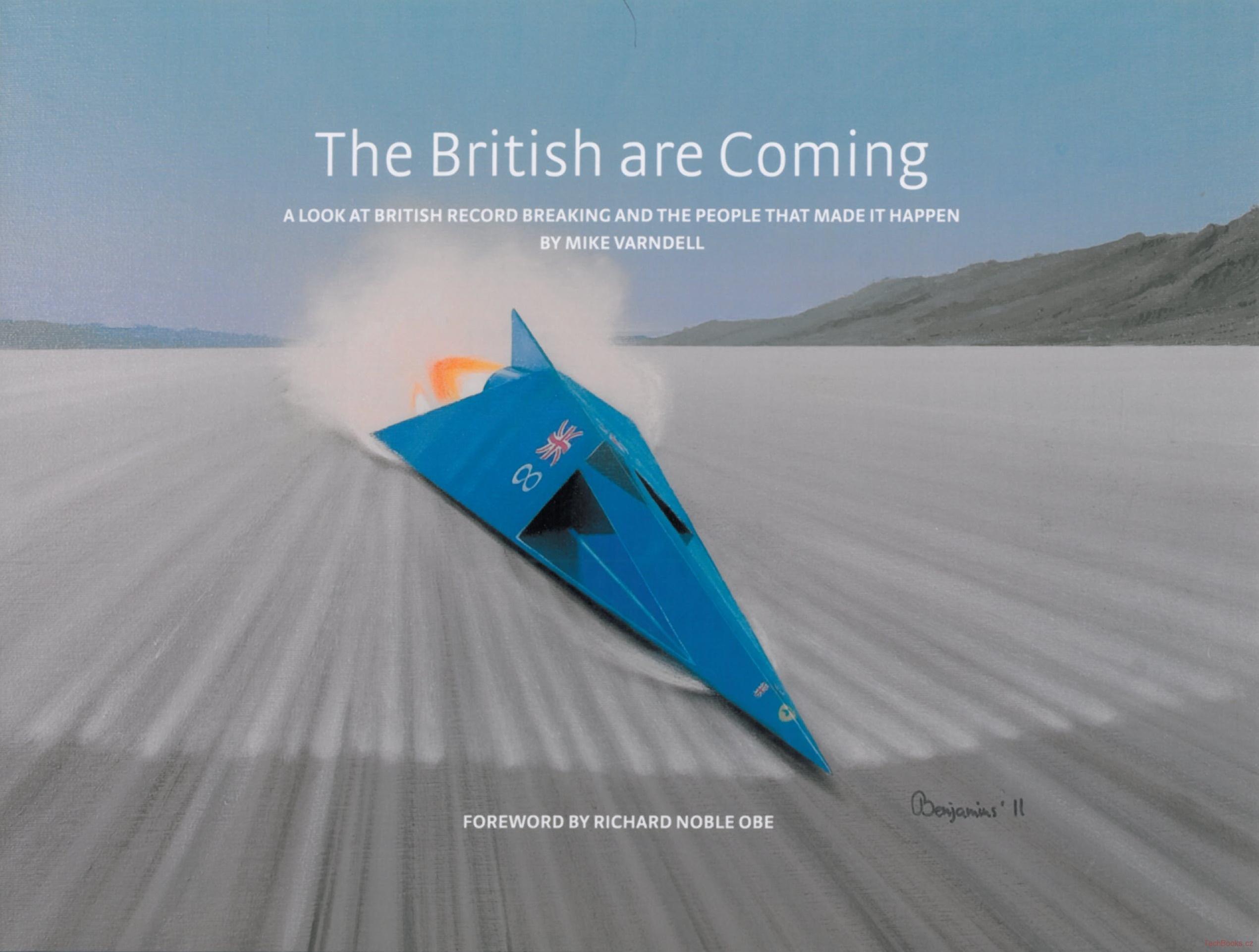 Covers all British landspeed and water record breaking achievements from 1926 to present day, colour throughout a must for all Record Breaking fans.

‘Within the pages of this book, you will see the fascinating world behind the scenes of record breaking, both past and present to the current day.

Record attempts are unique, an experience that you never forget, that words cannot describe and where friendships are made and kept, for a lifetime.’

‘The British are Coming’ – A strange title for a book about record breaking, or is it?

Consider how many times over the last 100 years in towns or villages in remote locations around the world people have said those words knowing that near to where they live, a British team would soon be arriving, bringing with them a unique vehicle and an entourage of the world’s media and people that just want to see another world record broken, putting that part of the world on the map and into the history books.

In the early days of the land speed record, British drivers were able to break records at locations such as Brooklands Race Circuit, Surrey and Pendine Sands in South Wales. As speeds increased, the requirement of longer locations to run on became a necessity. This meant that British teams had to travel the World to places such as Daytona Beach (USA), Verneuk Pan (South Africa), Bonneville Salt Flats (USA), Lake Eyre (Australia), Black Rock Desert (USA) to name but a few to achieve their aims. That’s not to say that record breaking ceased on British soil; Pendine beach is still used today, as well as a number of airfields up and down the country.

I have had mixed reactions as to my choice of front cover and feel that now would be a good time to explain my reasoning for what I have chosen. My aim for the cover has always been to stay impartial, not an easy task considering all the great material that has been made available to me. To come up with an answer of what to use, I contacted a good friend of mine, the artist Arthur Benjamins, arranging to meet and show him some ideas I had for the cover ... a montage of people and vehicles. But that looked so cluttered, I was back to square one.

As you often do when friends get together, we reminisced of fun times and people we have known; this visit was no exception, and a name that came to both of us was someone we had worked closely with and thought very highly of – Ken Norris. Then Arthur said “you know Ken had me start a painting for him before he died. Would you like to see it?” Jumping at the chance straight away, I recognised it and knew it would be the right front cover for the book. Unfortunately Ken had passed away before the painting could be finished, but by using this painting for the cover it feels like Ken has somehow played a part in the book, continuing his involvement with record breaking.

Throughout the pages of my book are some of the great British record breakers of our time, our childhood heroes, in some cases still our heroes today.  J.G Parry Thomas, Sir Henry Segrave, Sir Malcolm Campbell, Kaye Don, John Cobb, George Eyston, Donald Campbell CBE, Richard Noble OBE, Wing Commander Andy Green OBE, Don Wales, Richard Brown, Colin Fallows, Mark Newby, and (to prove that it’s not just a man’s world) Patsy Burt, the lady who for a short while broke British and World speed records, some of which still stand today.

As you would expect, there are photos of the drivers piloting their vehicles to British and World records, but that is not what this book is all about. I want to give you the reader a chance to see behind the scenes, from the designers of the vehicle, to the engineers who build the vehicle, and more importantly the mechanics that work tirelessly to see the vehicles that they have come to understand pushed to their limits, beyond what it considered to be possible. Driven by a special breed of driver that teams come to understand and respect, with the ability to not only do this once, but twice within a hour to set a record under FIA (car) or UIM (boat) regulations.

Remember record breaking is a sport, a very poorly paid sport, but a sport nevertheless. Gone are the days when sums of money were offered by major corporations to drivers and teams who pushed their vehicles through ever increasing speed barriers on land and water. Teams now have to work hard at gaining sponsorship deals to build, test and make record attempts.

So why do it? Why struggle to raise the money? Or search for that perfect surface to run your vehicle, more often or not in some of the most remote locations on the planet? The answer is relatively simple: “To be the best” to show the world that designers can come up with an idea, that the engineers can build, that the mechanics can then test and maintain, that the driver will push to its design limits having complete trust in the team behind them ... all with one aim – to reach that next milestone, to show that the impossible can be done, to be the best in the World.

I previously mentioned the drivers but what of the designers? Names like Ken Taylor, Ken Thompson, Reid Railton, Ken Norris, John Ackroyd, Ron Ayers and Jeremy Bliss to name but a few, maybe not household names. Without these designers, we would not have had the vehicles that have broken records over the past 100 years. The lesser known team members are the mechanics, possibly the best known being Leo Villa. Whilst I feel humbled by adding my name to such a list, I also feel very proud to say I have been a chief mechanic of a British land speed project and assisted many other British teams in other roles.

I would like you to consider the size of a record breaking team. Normally it consists of between ten and twenty core people, a sort of a family, a very unique family when you think of it, where strong bonds and friendships are formed. Often these friendships mean that as one project finishes, another starts and team members from the new project will call on trusted old friends to help form the new team and so it continues.

There has always been this close association between drivers, designers and mechanics on record breaking projects all working with one aim – to see a British team break records. Long may this continue and hopefully this collaboration of teams is reflected throughout my book.

As this book goes to print, Britain has its eye on more records. A team led by Richard Noble and driven by Andy Green have set their sights on what many consider to be the next great barrier on land – 1000 mph. Remember there are many classes of World records and Sir Malcolm Campbell’s grandson Don Wales has set his ambition on increasing the World land speed record for electric vehicles. In addition to this, other British teams are looking to construct and run vehicles for attempts on the outright water speed record, outright motorcycle record and wind powered records. It does not stop there, for there are many more class records, quite a few that have stood for a very long time, and each year British teams attempt to better these records whether it be on land or water. Some succeed, and some fail but one thing is for sure once bitten by the speed bug everyone involved craves more.

Whilst researching this book I came across some comments by British record breakers that I feel have a great significance. The first is from Kaye Don – “I do not think there is any limit to speed. What a man can do today, another man will surpass tomorrow”. How true this statement is when you think about it. As soon as a team breaks a record, other teams around the world are already looking for ways that they can better that record.

The next comment is from Donald Campbell CBE - “As the canopy clicks positively into place, you find you are in the loneliest place in the world”. Not such a strange comment to make when you consider however big or small a team is, at the end of the day it all comes down to one individual having the total confidence in themselves and the vehicle they are sitting in to achieve an end result.

The last comment, and possibly the one that best sums up what this book is about, is from Richard Noble – “For Britain and the Hell of it”.

On the 13th of October at Brooklands Museum, this book will be launched. Why the 13th of October? Because that was the day in 1997 Squadron Leader Andy Green became the first person, under FIA regulations, to travel supersonic on land while driving Thrust SSC. Although others may break the supersonic record, one day, they will however never be able to better being the first to do it, a British driver in a British car.

‘The British are Coming’ – 360 page hardback book in landscape 32 x 24cm with over 1000 photos black & white, and colour – many not seen before with nearly every chapter containing first hand written accounts by the drivers on what it was like to drive and pilot their vehicles.