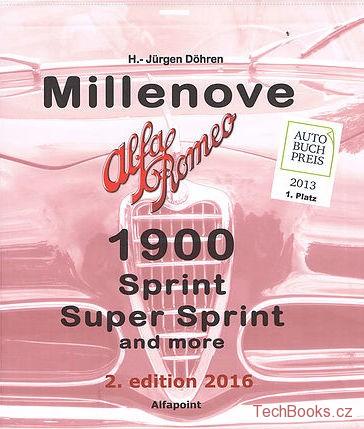 The history of the Alfa Romeo 1900, a great new beginning after World War II for Alfa Romeo. Rooted in the historical tradition of its product philosophy, Alfa Romeo foresaw and realized the worldwide evolving need in the early ‘50s for a quick trip limousine with luxurious comfort, excellent handling and high performance. The 1900 represents for the first time the successful synthesis of these values and thus raises the difference between series and "Coach Built" vehicles. Its centerpiece is the design by Orazio Satta engine with dual overhead camshafts, a design that has revolutionized the modern engine constructions. The TI version of this engine produces 100 horsepower, contributing its international race victories.

It only took a little more than two years to develop a completely new sports sedan. In the opinion of the author, that is a record-breaking milestone which deserves a closer look. Yet, not only the factory, but also the coach builders of that era contributed to make the 1900 project something special. Within the course of a few years, designers and coachbuilders ignited nothing less than a continuous firework of new cars. At the end of this era, 17 different more or less small manufacturers had built up to 70 creations based on the 1900 floorpan, which was supplied by Alfa Romeo and delighted car enthusiasts worldwide. All these vehicles are presented for the first time completely and in detail, in this book.

Over 100 years ago, a marque that stood out