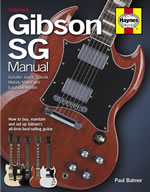 How to buy, maintain and set up Gibsons all-time best-selling guitar

Introduced in 1961, the Gibson SG is Gibson's biggest-selling guitar of all time, and is synonymous with Angus Young (AC/DC lead guitarist), Tony Iommi (Black Sabbath) and Robby Krieger (The Doors). The SG was originally produced as a more easily manufactured 'mass-production' version of the Les Paul, sales of which were diminishing at the time, but the solid-bodied SG ('Solid Guitar') soon became a revered instrument in its own right. Superbly illustrated and designed, this manual includes case studies of key models - everything from a vintage SG 'Les Paul' to a 2011 SG 50th Anniversary model - but also gives appropriate attention to today's affordable Epiphone versions, Specials, Juniors and Melody Makers.

Most rock and pop guitarists begin their playing

In series with the best-selling manuals on the

In series with the best-selling manuals on the

The saxophone is arguably the most iconic of all

Aimed at everyone with an interest in pianos,