Úvod »* NAVIONICS» Porsche Legends - Inside History of the Epic Cars

Porsche Legends - Inside History of the Epic Cars 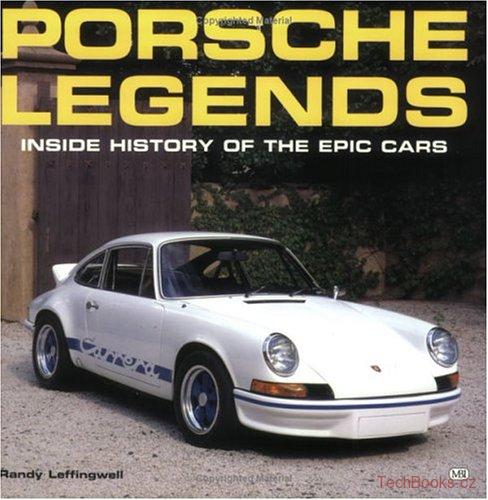 Stunning color photographs, rare archival images and detailed technical specifications superbly recount the epic story of Ferdinand Porsche and the famous automobiles he created. Interviews with Porsche engineers, designers and racers provide first-hand insight into the creation of the 356 Carrera, 911R, RS and RSR, the 930 Turbo, and the 928S, plus racy coverage of the 550 Spyder, the RS60LM and the 908 Langheck.

Randy Leffingwell's PORSCHE LEGENDS is what the Christophorus book PORSCHE:  PORTRAIT OF A LEGEND should have been.  In both, Porsche history is told as remembrances of an engineer or driver.  There are five or six interviews in PORTRAIT which make it worth buying, but mainly it's disappointing because it is too clearly a self-serving product of the advertising department.

In PORSCHE LEGENDS, the full page (10 x 10") color photographs and their reproduction are technically within kissing distance of Henry Rasmussen at his best, and Randy Leffingwell has a spectacular sense of place.  Though, as usual, whomever wrote the captions was apparently not actually shown the photographs.  Much like Rasmussen's books, each chapter features a specific car.  Unlike Henry's PORSCHES FOR THE ROAD the legends are not only the cars themselves and the Horatio Alger types who own them, rather an engineer or driver who was there and knew what was happening, frequently why, or at least appreciated the irony of some of the situations.  While Ferry Porsche and Bernhard Blank are shortly quoted, the real meat comes from interviews with Ernst Fuhrmann, Johnny von Neuman, Paul Frere, and Paul Ernst Strähle.  Of necessity, the Spyder chapters rely heavily on quotes from von Frankenburg writing in CHRISTOPHORUS, but even these fit seamlessly.

One additional pleasure of the book is its assumption that we are already familiar with the basic stories.  It's well known that Ernst Fuhrmann not only designed the 4 cam engine but he also designed it so that it would fit in a 356.  It is not commonly known that he had the first engine in his personal 356.  Or that von Hanstein phoned from Paris with the directive that Führmann's car should be sent for some important customers to drive.  Fuhrmann says that he, "simply refused ...'Dr. Porsche then called on me... He was very friendly, but he would like me to send the car.'" As Fuhrmann feared, the engine was destroyed.  "So Dr. Porsche came to me ... in Paris, on the Porsche stand, was the first Carrera production car.  And of course, this was the nicest one. It had leather seats, and gold letters on the outside ... Everything was special.  And so Dr. Porsche said, 'OK, this car now goes to Dr. Fuhrmann.'  So I had, even before Dr. Porsche himself, the finest Carrera in the company."

Paul Frere remembers that his first drive for Porsche was also his first at LeMans. His first practice in the Spyder prototype, which "instead of having trailing arms, which toed the rear wheels slightly in, we have forward-facing arms which made them toe out," was in the dark!  Frere almost lost the car at the first corner of the first lap!

There were two Sauters? Heinrich's "interest was in rallying and his involvement was temporary, although the results did have a lasting impact." The Heinrich Sauter roadster preceded the type 540 Roadster America which in turn was the prototype for the Speedster. Kurt Sauter was a coach builder. "His involvement was career long, but his impact was fleeting." The Kurt Sauter bergspyder is shown for the first time, as is an extensive examination of the 1959 Beutler cabriolet.

Chapters on the Beutler 356A cabriolet and the Bertone 911 cabriolet paint a clear picture of the change in Porsche's relationships with independent body builders since the Gmund days.  Most of us are aware of the stories of Max Hoffman sketching out the Speedster on a napkin for Ferry Porsche.  But to me, this story has never really rung true. Max Hoffman was dedicated to selling expensive European cars to American "nobility". His idea of a lightweight Porsche was the America Roadster, which cost considerably more than an XK Jaguar, von Neumann wanted a car in which Californians could troll for girls on Saturday night.  "It's a boulevard race car.  Who needs roll-up windows.  I swear, the first time I told them about a car without roll-up windows, they thought I was nuts.  Who needs roll-up windows in California?"'

Although the company's first car, the 356 , did