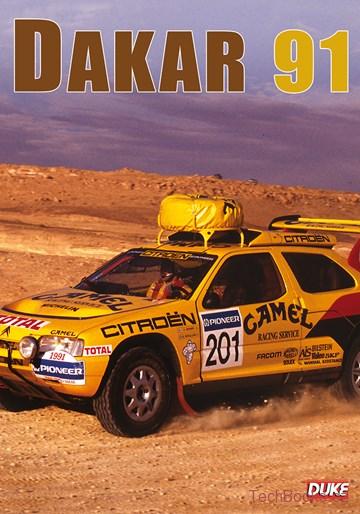 Teams from Citroen, Nissan, Toyota, Mitsubishi and Lada were among the 400 competitors lined up in the rain on the Rue de Vincennes for the start of the 1991 Paris Dakar Rally.
From Paris the teams headed for Colonel Gadaffi's Tripoli before heading deep into the desert for the gruelling stages that would exact a heavy toll on cars, trucks, bikes and their pilots.
Once into the sand dunes the pace of the brave competitors was punishing: axles sheared, tyres punctured, engines overheated, burned out and exploded. 129 machines were out of the race by the time Libya was crossed - four more countries lay ahead for those still going.
Ari Vatanen never looked in too much danger of missing out on his third successive car win; Stephane Peterhansel in his fourth Paris-Dakar started strongly in the motorycle class and battled every inch of the way for his lead against strong opposition.
The Paris Dakar in its heyday was a heady mixture of all-out racing, adventure and camaraderie and it is captured beautifully in this excellent review