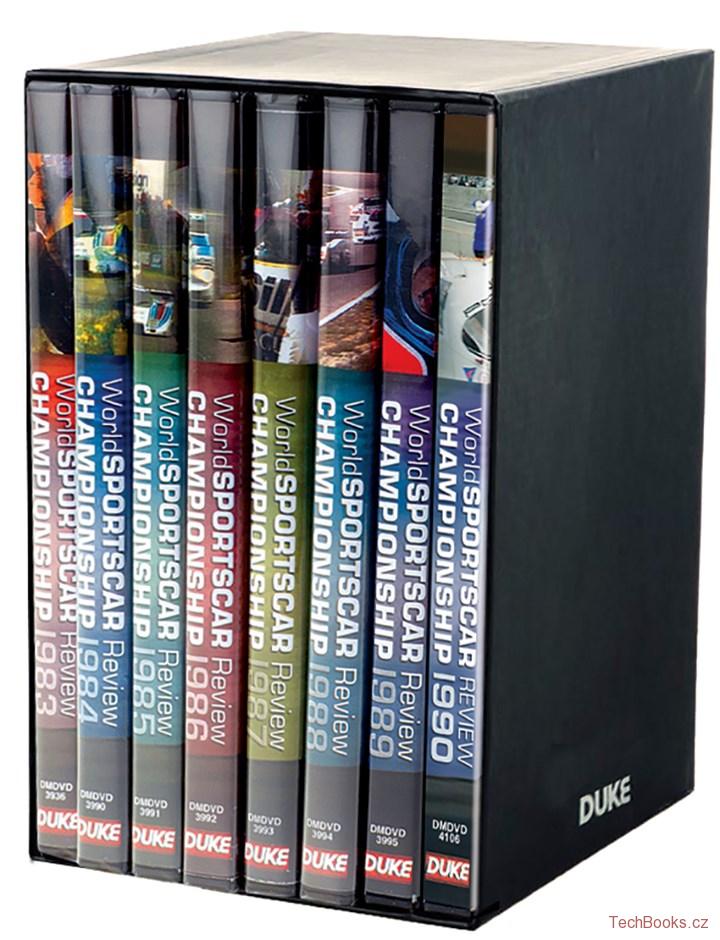 The 1980s was the era of the massive Group C sportscars, when the World Championship rivalled Formula One for drama, excitement and wheel-to-wheel racing.

All the big names are here – Porsche, Jaguar, Lancia, Sauber, Nissan and Toyota – plus all the legendary drivers, including Jacky Ickx, Derek Bell, Stefan Bellof and Martin Brundle.

Now you can relive eight spectacular seasons of the championship in these review, never previously available on DVD. Each boasts amazing race action, plenty of in-car footage and interviews with the big names of the period, ensuring comprehensive coverage of every year.

1983 – The works Rothmans Porsche team dominated the season with its mighty 956, despite challenges from the privateer Porsches of Joest, J David and Kremer, and the Martini Lancia team. Relive the full story of the down-to-the-wire title battle between Ickx and Bell, including the car-wrecking Fuji round!

1984 – The works Porsche 956 was once again the class of the field, and while Ickx and Bell showed their usual style, it was Bellof and Jochen Mass who would battle to the end for the championship, entering the final round split by just three points!

1985 – The new Porsche 962C added to a fascinating season of racing, however this year will always be remembered for the tragic accidents which claimed the lives of reigning champion Stefan Bellof and rising star Manfred Winkelhock, and the pitlane fiascos which saw the sport change forever.

1986 – A year packed with incredible racing and unforgettable highs – including Jaguar’s home win – but also a season dogged by controversy right down to the very last chequered flag. It looked like the works Porsche domination may be broken, but there would be a sting in the tail.

1987 – After the pain of 1986, Jaguar was out for victory, and the Tom Walkinshaw-prepared V12 XJR-8 machines humiliated the Porsches all season. Dominating all but two races of the season, the British marque was back on top of the world, and back in style.

1988 – With Porsche pride being carried by the privateer teams, it was left to Jaguar and the awesomely powerful, turbo-charged Sauber Mercedes to battle for the title. Championship rivals Brundle and Jean-Louis Schlesser battled for honours all seasons in an enthralling year.

1989 – The Sauber Mercedes team put the ‘silver arrows’ back on top of the world with its awesome C9, despite some heroic efforts from Jaguar, Toyota and Nissan. It was a thrilling championship battle between Sauber stars Schlesser and Mauro Baldi, with the title-deciding final round marred by a massive smash.

1990 - The 1990 World Sportscar Championship saw a long running battle between the ‘Silver Arrows’ of Team Sauber Mercedes and the ‘big cats’ of the Silk Cut Jaguar XJR-11s. The grid was packed with talented drivers at every circuit visited, guaranteeing top-quality entertainment for the record crowds.

Jochen Mass, Jean-Louis Schlesser, Mauro Baldi, Martin Brundle and Alain Ferté were among the winners, along with a little known German driver by the name of Michael Schumacher…