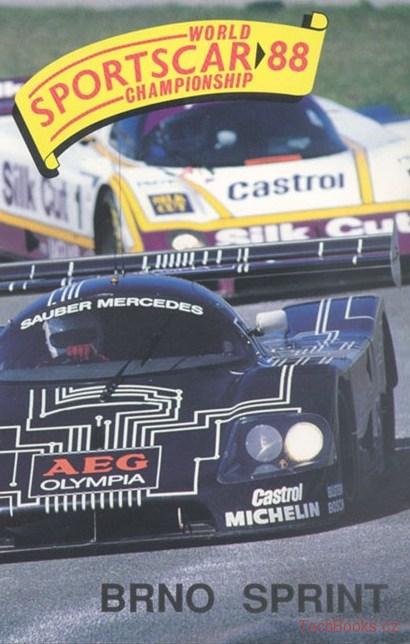 With the memories of the Silk Cut Jaguar victory at Le Mans still fresh, the teams moved on to Czechoslovakia, the first ever round of the World Sports prototype championship to be run behind the Iron Curtain.
The Jaguar team had high hopes of dominating this race on the impressive Brno course. However, practice soon showed that the Sauber Mercedes team, who had withdrawn from Le Mans had prepared their cars to perfection, the turbo Mercs more than out-running the Jags in speed and handling. Jochen Mass had set the car up beautifully to set the fastest practice lap, and with team mate Mauro Baldi second fastest, the Cats were forced to start on the second row of the grid
Unlike most other rounds, this was a 'sprint' race, of only 360 kms against the normal 1000 kms, so any error, either mechanical or driver induced, or any unplanned pit-stops were reflected in the results.
The team managers can gamble on swopping drivers between cars, and when Mauro Baldi ptted with a puncture, championship leader Jean-Louis Schlesser was then nominated to co-drive the sister car with Jochen Mass.
Did the gamble pay off? Watch the race drama unfold as this video bring you all the action.