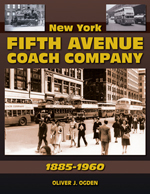 New York City's legendary Fifth Avenue Coach Company was famous for its double-deck buses as well as its role as a leader in public transportation in New York City. It was the first bus company with gasoline-powered buses and air-conditioning, and also the last company in the U.S. to use double-deckers, which were also the last double-deck buses built in America. Inside are all the various bus designs used: o Early horse-drawn omnibuses and buses brought over from England, o Early Brills built on French chassis, o Buses Fifth Ave Coach built in their own garage on 102nd Street using American-made chassis, o Later Yellow Coaches and GMCs. A total of 112 pages and 260 illustrations, SB

By James K. Wagner. Focusing on GMCs most fruitful

The Museum of Bus Transportation presents this

The GM old look transit bus was introduced in

The first trolley buses began operating in the