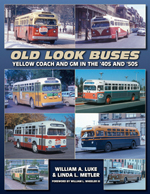 The GM old look transit bus was introduced in 1940 with the production of the Model TG-3201. The retronym old look was applied after the release of the GM New Look bus. Before that it was considered the new generation bus.
Unlike most of the body-on-frame buses preceding it, the old look buses were of monocoque design. The use of a General Motors diesel engine helped shepherd the change from gasoline to diesel-powered buses. The somewhat streamlined appearance and standee windows made the bus unique and well recognized as well as liked by passengers, operators and bus enthusiasts.
With the introduction of the GM New Look bus in 1959 production stopped on all old look buses other than 28-foot models (which were built until 1963) and 30-foot (models which were built until 1969).
Through vintage black & white and color photographs, William A. Luke portrays not only the various old look buses, but also history about the bus companies that owned them. Also included are 2 bonus sections. First is a complete list of models and vital statistics for each. Second is a collection of vintage bus company publicity pieces. Both of which will delight old look enthusiasts. A total of 112 pages and 175 illustrations, SB.

By James K. Wagner. Focusing on GMCs most fruitful

The Museum of Bus Transportation presents this

The first trolley buses began operating in the