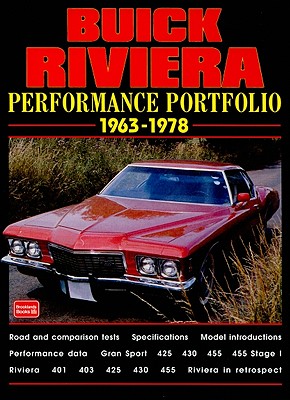 It is interesting to see how the products of car manufacturers go in cycles. The 1963 Buick Riviera was General Motors response to the success of the four seater Ford Thunderbird, which had grown out of the two-seater Thunderbird that had been Fords response to GMs 1953 Chevrolet Corvette. In the early 1960s, Buick sales were going through a bad patch, and so the new personal-luxury coupe was assigned to that division to give it a boost. The Riviera succeeded only too well. Always sold as a hardtop model with two doors, it played the performance card more effectively than Fords Thunderbird. Power and performance gradually increased over the years and the Gran Sport model of 1965 could hit a genuine 125mph if there were no curves to hinder its progress. Handling was also remarkably good for such a big car. The first generation Riviera was a really striking looking car, but from 1966 it succumbed to the growth trend of the times and became bigger and heavier. Buick kept to the traditional rear-wheel drive, but in other respects the two cars served similar ends. For 1970, the car took on a longer hood and was made available with the new 455ci V8, but from there on emissions regulations began to take their toll on performance, and the oil crisis in the early 1970s did much damage to sales. Meanwhile, the 1971 Riviera had become even bigger, and its new styling featured a dramatic boat-tail rear which was too much for many buyers. Buick toned it down for the following year, but other factors were affecting sales by then, too. As the road tests in this book show, horsepower was disappearing in spadefuls in the mid 1970s, and from 1977 the only way to maintain credibility was to reduce weight by downsizing, in line with the rest of the industry. Yet the Riviera name still has much of the magic which it enjoyed in the early days, and in the 21st century enthusiasts still enjoy running and restoring these classic Buicks. This book is for them. Models covered: 401, 425, Gran Sport 425, 430, 430GS, 455GS, 455 Stage 1, 455, 403 & 350.