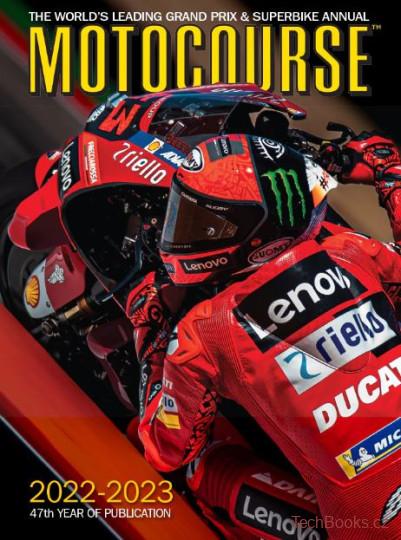 For two-wheeled motorsport fans and aficionados, MOTOCOURSE stands alone as the leading yearbook covering the sport.

Since its launch in 1976 it has evolved through the decades into the most authoritative chronicle on the FIM motorcycling world and key national championships.

The 20-race MotoGP championship has produced a fascinating mix of races which saw no fewer than eight different riders take victories in the first fourteen rounds, before the season climaxed in Valencia in November.

Editor Michael Scott and Neil Morrison supply full reports on each Grand Prix, and Matt Birt brings us his usual run down on the comings and goings of each of the 11 squads in the Team-By-Team review, which has full personnel and technical specifications, the bikes being illustrated beautifully by Adrian Dean’s meticulously crafted drawings.

Full coverage is given of the 13-round World Superbike Series in which Yamah's defending champion Toprak Razgatlioglu faced a resurgent Jonathan Rea and a returning Alvaro Bautista to Ducati. All the races and the seasons bikes and riders are put under the microscope by leading Superbike writer Gordon Ritchie who also covers the World Supersport class with Yamaha the dominant force.

Peter McLaren provides full race results and lap charts from every round of both MotoGP and World Superbikes as well as complete points table from all the major championships.

The well of talent that eventually will become the cream of racing almost inevitably springs from the amazingly well-conceived Red Bull Rookies series, in which youngsters vie for supremacy on identical machines. The vastly experienced Peter Clifford charts the ups and downs of their close-fought battles.

The Isle of Man TT and other road races return after a two year break due to the pandemic, there were some notable performances but also tragedy as several lost their lives in their pursuit of victory.

The increasingly popular BENNETTS British Superbike Championship continues to grow in prestige and stature, with an ever-deepening field of talent competing across eight different classes throughout a weekend packed with action. MOTOCOURSE continues its increased BSB coverage including the well supported Honda British Talent Cup and HEL Junior Supersport Championship’s where stars of the future develop their skills before progressing up through the ranks.

MOTOCOURSE also covers the racing in the USA, via the Moto America Superbike series which saw Yamaha’s Jake Gagne emerging the winner again in the Superbike class despite a spirited season long challenge from MotoGP veteran Danilo Petrucci.

For 47 years, MOTOCOURSEhas been the bible of motorcycle racing, written and illustrated by the world’s leading practitioners. The superlative reproduction of its brilliant photography brings the drama and spectacle of a thrilling racing year to vibrant life.

MOTOCOURSEis the essential collectable, and the mainstay of every road racing fans bookshelf.

Now in its 41st year, Motocourse continues to go

Now in its 43rd year, Motocourse continues to go