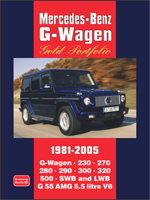 The Mercedes-Benz G-Wagen has been around for a very long time, even by Mercedes’ standards. Sure it has undergone several reincarnations in the more than two decades of its existence but underneath it all it is still a 1981 model that was designed around a military specification. To get the required volume of business to make it pay, Mercedes-Benz offered it to the general public and soon established a solid niche with the G-Wagen. In terms of sales numbers, they were tiny compared with the hordes of Land Rovers, Toyota Land Cruisers and Nissan Patrols and the countless others that have been sold in the same period ostensibly to buyers having similar criteria when it came to the performance of their vehicle. Mind you, the G-Wagen was never inexpensive. The problem for people considering the G-Wagen was that it was neither price nor performance competitive unless you were going to indulge in some extremely serious off-road driving. In that scenario its only true competitor would have been the Steyr Pinzgauer and that was even more expensive! Like the original Land Rover that latterly evolved into the utilitarian Defender, the G-Wagen was not a particularly stylish vehicle. It was, after all, designed around a military specification and so was rather square-cut unlike most of its rivals (mainly Japanese) where there was some attempt to make the vehicles look less utilitarian, less intimidating. Nevertheless, Mercedes-Benz stayed with it and as the years went by the company offered buyers long and short wheelbase options and a wide range of four- and six-cylinder engines from their passenger car program. Even the interior was spruced up to give passengers a feeling of luxury while bush bashing. In more recent times buyers have been able to order an AMG version with the company’s huge 5.5-litre supercharged V8 engine, w-i-d-e wheels and tyres, full leather interior, automatic air conditioning and most of the other luxury paraphernalia that wealthy buyers seem to need. Its performance, by the way, is electrifying so long as you don’t have to pay for the fuel! Mercedes-Benz introduced the much softer M-Class to cater for a wider audience and was extremely successful with this model. Undoubtedly a new and more up-to-date G-Wagen is on the way and will probably be less focussed than the original but very capable nonetheless. Included are road, off-road & comparison tests, history & buying second hand. Models covered: 230, 270, 280, 290, 300, 320, 500, G 55 AMG 5.5 litre V8 in the short & long wheelbase.

The G-Class was created for off-road driving and

Features • Until now, little information on the