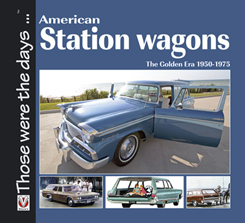 Those were the days

Examines the important quarter century period when the American station wagon was a family standard and status symbol of a successful suburban lifestyle. With 100 images backed by detailed captions and descriptive text, this book details the multitude of makes and models, as well as recounting the essential role of the classic American station wagon in North American society in the 1950s, 1960s and 1970s.

Looks at the American Woodies built from the 1920s