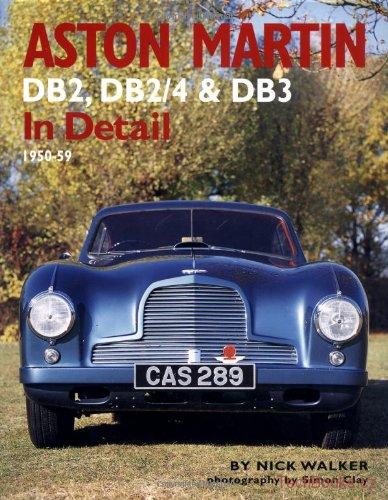 Aston Martin's survival in the immediate post-war period was by no means certain, and it was to depend heavily on tractor and gear magnate, David Brown. Purchasing the company in 1947, he quickly followed up by buying Lagonda, moving both firms into adjacent premises at Feltham, thus forming Aston Martin Lagonda.

Using the pre-war Atom as a basis, Aston Martin's first post-war car was the 2-Litre Sports. It was the company's next offering, however, that really set the ball rolling. For the DB2, Claude Hill's chassis was mated to Lagonda's 2.6-litre twin-cam six designed by W O Bentley. This stunning Frank Feeley-styled car was the first of a long line of Aston Martin supercars.

This book opens with a history of Aston Martin leading up to David Brown's purchase of the company.Then comes a highly detailed analysis of the 2-Litre Sports (retrospectively known as the DB1), covering every aspect of the chassis, running gear, engine and transmission. This sets the scene for the chapters that follow, on the DB2, DB2/4, the DB2/4 Mark II and III and the sports racers DB3 and DB3S. Each of these receives comprehensive treatment, including information on differences from previous models, production changes, competition history, performance and road manners.

For owners, present and prospective there is a also a chapter devoted to the practicalities of owning and using these cars today, including advice on common problems, maintenance and preservation.

Outstanding examples of all models have been specially photographed in great detail for this book and are featured in some 110 colour shots. There are also around 140 black-and-white photographs drawn from the archives as well as material from Aston Martin sales and publicity material.