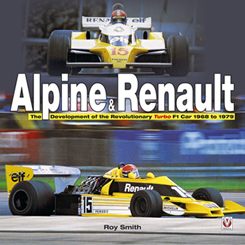 • The first English language book about Alpine Renault and the development of the first turbocharged F1 car
• The full, detailed story of the Alpine A500
• Contains many previously unpublished photographs
• Includes interviews with the major players
• The first time the 1968 A350 story has been told in English
• The RS01 changed the motoring world's thinking about turbos
• A tale of huge dreams becoming reality
• Describes the untold input from Elf and the men behind the scenes
• Will appeal to all enthusiasts of Alpine, Renault and Formula 1

Alpine and Renault describes the history of each company involved, the thinking behind the creation of the first turbo-charged Grand Prix car, and the men concerned – from the first ideas to the final ultimate success of a Grand Prix victory. The book covers the development of an experimental car by Alpine in the 1960s, and the story of the men who worked with Gordini, the engine-tuning genius who went on to create a power unit that changed the world’s thinking on engine design. The early tests, first car designed at Alpine, and the Renault-designed and built Grand Prix car made to the specific Formula 1 regulations are described, as well as the full story of the Renault Turbo Grand Prix cars, including interviews with the men of the time, a transcript of the first public test, and race reports on every event. Contains over 400 photos (mainly colour) and special illustrations.

Alpine was really the only sports car volume

Features • The first comprehensive history of the