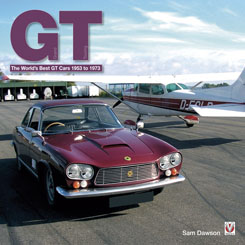 No-one has written a book exclusively on this topic before • Grand Tourers capture an immensely evocative cultural zeitgeist • Many of the cars in this book are practical and accessible • The stories behind these cars creations make for interesting reading • It gives some limelight to 2+2s since overshadowed by supercars • It encourages readers to use classic cars as originally intended • It draws many links with modern cars, interesting younger enthusiasts • Grand Touring capabilities make owning an exotic more manageable •

Since the arrival of the Lancia Aurelia B20 Grand Tourer (GT) in 1953, GTs have been the ultimate in luxury performance cars. This book, the first in a series of three, tells the stories behind some of the most glamorous and alluring vehicles of the fifties, sixties and seventies - the Grand Tourers. Since the arrival of the Lancia Aurelia B20 GT in 1953, manufacturers have competed - with both popular culture and each other - to find that perfect balance of luxury, accommodation, and sporting ability. With nearly 150 pictures and written from a social as well as technical perspective, this is a fascinating book with a choice of cars that will cause many heated arguments amongst motoring enthusiasts!

Get behind the wheels of more than 50 of the most glamorous, beautiful, fast and capable cars of the fifties, sixties and seventies in this, the first of a series charting the true Grand Touring cars, the history and the culture of long distance travel and exotic locations. These are the cars that inhabited the world of the jet set and they could become part of your life too. Some are depreciated bargains, some are blue-chip investments, and all were exclusive when new and still every bit as glamorous today. This book takes in the milestones, the innovators, the oddities and the mainstays of this diverse sector of the car market. From the 1953 Lancia Aurelia B20 GT, the car that arguably became the template for the Grand Touring car; the Facel-Vega, which united American power with European sophistication; the experimental aerodynamics of Alfa Romeo; the innovations of Jensen; and the design and engineering geniuses behind the Lamborghini Espada who took it from fanciful concept to production reality. We look at the waifs and strays too: The Marcos Mantis, a GT car you could build yourself; the Avanti, an all-American GT originally built for just a year but still available brand new today; and Iso, an Italian industrial giant which cornered, captivated and lost the transcontinental V8 market within a decade, to name just a few. We also look at the way global politics and economics have affected domestic car building and international travel, and the effect this had on these cars, from the building of unrestricted motorways after the Second World War, through to the devastating oil crisis of 1973, which changed the way we look at cars forever. This book shows that the cars which once powered through your dreams are still practical and now often well within reach. Dare to dream again! With nearly 150 pictures and written from a social as well as technical perspective, this is a fascinating and contentious book.