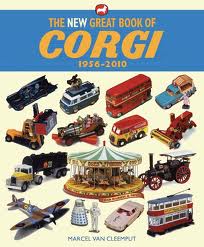 The New Great Book of Corgi' chronicles the entire period of Corgi production from its inception at the British Industries Fair in 1956 to the present day. The company owes its great success to the constant introduction of new gimmicks and technical innovation, leaving its numerous competitors playing 'catch-up' all the time. Corgi Toys have brought thrills and enjoyment to children and collectors around the world for over fifty years, with such classics as the James Bond Aston Martin, Chitty Chitty Bang Bang, the Batmobile and many, many more. The range comprised some of the most exciting and varied diecast models ever produced, and this book does full justice to every one. When the business was rescued from administration in the 1990s, it continued to introduce breathtakingly spectacular and detailed models for the collectors market, including civil and military aircraft and colourful series of circus and fairground models. Ex-chief designer Marcel Van Cleemput's extensive archive, and with generous access to Hornby's Corgi archive, 'The New Great Book of Corgi' promises to be the most authoritative single-manufacturer histories ever published, with over 700 colour images. It also includes Marcel's fascinating autobiography.

Corgi Toys, The Unauthorized Encyclopedia of

The rise, fall and rebirth of Corgi Toys is

This colorful history features a full-color