Úvod »Motocykly» Superbikes and the 70's

Superbikes and the 70's 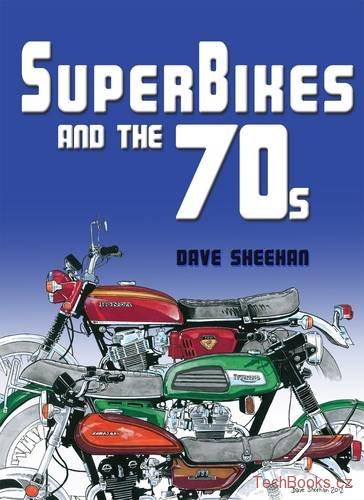 When rumours reached Honda that BSA/Triumph were developing a 750cc triple, it galvanised the Japanese giant into creating the world beating CB750 Four. The British triples may have reached the market first, but the launch just a few months later of Honda's four-cylinder 'Dream Four' (with electric-start, disc brakes and Candy-painted bodywork) caused a sensation in 1968. A new word now joined the lexicon: Superbikes. The opening salvoes in a horsepower war had begun! Superbikes and the '70s captures the spirit of those heady days. It tells the story of a Britain emerging from the dull, grey years of post-war austerity into the colourful, gritty and psychedelic reality of the '70s. Despite a backcloth of dubious fashion, rampant inflation, oil embargoes and wild-cat strikes these lightening-fast, chromium-plated polychromatic motorcycles suddenly became affordable in an age of full employment. For motorcyclists the '70s meant reliable, beautifully-designed machines delivering record-shattering performance! Superbikes and the '70s brings this all home. However, it isn't just about the bikes. It's about their times, too as reflected in its popular culture, politics, and the people key to the story of superbikes - the engineers and designers, the larger than life racers, like Dick Mann, Gary Nixon, Barry Sheene and Paul Smart, the dealers and salesmen, and the industry's titans - Edward Turner and Soichiro Honda. It gets behind-the-scenes to give the full story of bikes like the Triumph and BSA triples (including the Vetter-designed Hurricane), the Honda CB750, the awesome Gold Wing and the outrageous six-cylinder Honda CBX1000 and Kawasaki Z1300 megabikes. There is also the seriously mad Kawasaki Mach III and Mach IV two-stroke triples, Ducati's remarkable Daytona-winning 750 twin, Laverda's hairy-chested Jota - and, of course, Milwaukee's XLCH Sportster, the seed of the Harley come-back. Written by Dave Sheehan, Superbikes and the '70s is well illustrated and packed with anecdotes and a wealth of thoroughly-researched detail. The author presents the story from the perspective of those involved at the time, the outcomes of whose decisions were by no means certain, with the result that the narrative reads like a thriller. A recurring thread throughout the book is Cycle magazine's seminal 'Superbike 7' comparison tests in 1970 and 1973 which demonstrated that superbikes were changing - riders no longer had to sacrifice civility, comfort and reliability in the pursuit of handling, speed and acceleration. Superbikes and the '70s is their story.

Cena pro Vás 799 KČ
Classic Superbikes from around the World

OFFICIALLY, THE SUPERBIKE WAS BORN IN 1968. BUT IT