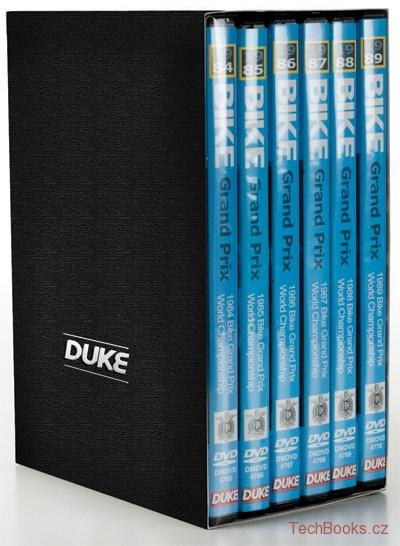 This amazing collection brings together fast and furious action from six history-making years of motorcycle Grand Prix racing.
The 6-disc collection features reviews from every 500cc championship season from 1984 to 1989.

The opening DVD brings together the entire archive footage from 1984, with highlights from 8 rounds. Every other DVD in the collection is a comprehensive review of the year, with action and drama from every round of each championship chase.

There’s more than 20 hours of jaw-dropping racing to enjoy in this essential collection.

Each year’s highlights package is bristling with the very best footage, including skilfully combined on-bike and trackside camerawork. Plus, of course, there are plenty of interviews and behind-the-scenes features.

The collection, presented in a handsome case, is full of heroes, legends, iconic machines and era-defining moments from an unforgettable era of Bike GP.

The collection opens with a look back at the 1984 season, with highlights of 8 scintillating races. Up against the formidable resources of the Honda team and its talented riders, Eddie Lawson must have had doubts at the start of 1984 about his ability to become World Champion. Could he possibly equal and even better 'Fast' Freddie Spencer? Did the works V4 Yamaha have any edge on the Hondas? What threat would Randy Mamola pose? Above all, how would he cope with the massed ranks of Hondas when they pitched in the full team effort against the single Yamaha? The Honda proved to be fast from the first race in South Africa, but Spencer's hope spectacularly spun away as his rear wheel collapsed in the closing moments of qualifying, tearing ligaments in his right ankle in the process. Lawson took advantage on the new twin-spar framed Yamaha OW76 reed-valve 500, riding to victory in the rain and his subsequent four wins and four second places were enough secure his first 500cc world championship. Mamola was never far off the pace though, having taken the other 3 podium positions of the season and finishing second overall, 31 points behind Lawson. Frenchman Raymond Roche (Honda) still managed to take third place in the championship without winning a race, 12 points clear of a relegated Spencer, who had even ditched his V4 in favour of the established V3 in a last attempt to regain his title. Ron Haslam (Honda) and Barry Sheene (Suzuki) stood shoulder-to-shoulder in fifth and sixth position. In this newly edited 208-minute DVD we include our entire archive of broadcast footage, for the first time. Featuring elbow-to-elbow action, full commentary and rider interviews, much of it is not seen on TV, sit back and share the eighties GP experience.

Next is 1985, when legendary names did battle across the world in 12 fast-paced, demanding races. The footage has been re-edited to take you even closer to the action as Americans Spencer and Lawson go head-to-head in the championship battle, closely shadowed by the likes of Haslam, Mamola, Wayne Gardner, Christian Sarron and many more of motorcycle racing's biggest names. Spencer was out to become the first person to claim both the 250cc and 500cc championships in the same season. With the 250cc title under his belt, he had to wait until the penultimate round to wrest the 500cc crown from Lawson. It hadn't been a straightforward trip to the top as the action moved around the globe, from South Africa to San Marino. Injury in Yugoslavia, crashing out in Holland and damaging his hand at the British GP could all have threatened Spencer's title tilt, but as the flag fell in Sweden, he could relax - victory was his. Reigning champ Lawson had done everything he could to keep his Marlboro Yamaha in front of rival Spencer's Rothmans Honda, but he simply didn't have the pace to win. All the vital moments of the fight for the 500cc title are captured here in four hours of action-packed highlights. Fantastic elbow-to-elbow battles, fiery crashes, dices on rain-soaked tracks and interviews with the leading riders - including an extended post-season chat with the new World Champion - make this an essential record of an historic year in the 500cc Championship, the pinnacle of motorcycle racing. Jaw-dropping footage from on-board cameras mounted behind the faring of Mamola and Haslam's machines gives you an awesome rider's-eye view of some truly unforgettable moments, including racing in the rain, hammering through the daunting Eau Rouge corner at Spa and unceremoniously tumbling to the ground! And slo-mo footage lets you re-live some of the most dramatic and important moments - including Lawson's dramatic exit from the Dutch TT.

We move on to 1986 and as the finest motorcycle racers gathered at the opening round there was one question on everybody's lips - could anyone beat reigning king Spencer's Rothman's Honda? Although tipped to retain his title, a persistent wrist injury prevented Spencer mounting a real defence. That cleared the way for adversary Lawson to lead the charge on his Marlboro Yamaha as the world's premier motorcycle race series contested 11 fast-paced rounds. Australian Gardner won the first race, but struggled to adopt the mantle of Rothman's Honda team-leader in place of the absent Spencer. Lawson dominated the next four rounds, but as the championship passed the halfway point the Californian's luck changed. At the Dutch TT, where his title hopes had evaporated in 1985, Lawson tumbled out of contention, allowing Gardner to take the win and renew his championship challenge. With just three rounds remaining, Gardner dug deep and produced an awe-inspiring victory in heavy rain at the British Grand Prix. The penultimate round, in Sweden, would be the race of the season. Lawson was dogged by Gardner for lap after lap, the Australian refusing to relinquish his slim title ambitions. However, a slower machine ruined the Honda rider's challenge and allowed Lawson to record his sixth win of the season, and the 1986 World Championship. This DVD brings you all the vital moments, with incredible trackside, on-board and slo-mo footage, plus fascinating interviews with the leading riders. There's also the debuts of British sensation Niall Mackenzie, future World Champion Kevin Schwantz and legend Kenny Roberts' Yamaha team.

In 1987, races were to be held across three continents in one of the toughest-ever campaigns - and with three of the finest motorcycle racers ever to grace a circuit hell-bent on securing the title, it would be one of the toughest-ever championship battles. Reigning champion Lawson may have been carrying the number one plate, but Rothmans Honda Rider Gardner was tipped to lead the title charge from round one, held at a rain-soaked Suzuka in Japan. However, it was Californian Mamola who drew first blood with a stunning victory in front of the 100,000-strong audience. Gardner, Lawson and Mamola would dominate the season, sharing wins as the action moved through Europe and South America. It was a long, and often difficult, road to the final race in Argentina, with mechanical woes, tricky conditions and rider error ensuring the title chase remained tight. After eight rounds, Gardner held just a 12-point lead over Mamola, and at the British GP Lawson proved he hadn't given up yet with a masterful win. The nip and tuck battle continued, but Gardner refused to let the pressure get to him. The Australian's inspired and consistent riding ensured he kept control of the race for the 1987 crown, securing the title at the penultimate round with his seventh win of a truly amazing season. This disc features action from all 15 races, including Brit 'Rocket' Haslam stunning the world with his amazing starts, Scot Mackenzie's exceptional performances, two-times world champion Spencer's disastrous season and Sarron desperately trying to keep his machine upright! Slo-mo footage lets you re-live the faring-smashing tumbles, near-misses and breathtaking overtaking manoeuvres.

During 1988 the emergence of a new generation of hard-charging talent made this one of the most memorable seasons of GP motorcycle racing ever. Reigning World Champion Gardner and arch rival Lawson were expected to dominate again, but the new breed of two-wheel heroes were ready to rip up the form book and upstage the legends of the sport. In Japan, for the first race, it was Texan Schwantz who, in only his seventh 500cc World Championship race, would take victory and an early championship lead. Californian Lawson scored a hugely popular home win at the United States GP, but as the European leg of the championship started it was Kevin Magee, another emerging talent, who would take the chequered flag first. As the season unfolded, Lawson's unquestionable talent would see him dominate the racetracks of Europe, with Schwantz the only other man to take the top step of the podium until the mid-way point of the season. As the World Championship reached the Dutch TT, Australian Gardner suddenly found his form, taking three wins in a row to cut the points deficit to just 20 with 10 rounds complete. However, his championship ambitions were dealt a cruel blow in France when he was forced to retire while leading on the last lap, gifting the win to Lawson. Gardner refused to admit defeat, claiming another win and three more podium places in the final four rounds, but it wasn't enough to overhaul Lawson, who rode to his third World Championship title. This DVD has drama from all 15 races, including the heroics of Brit riders Mackenzie and Haslam, the spectacular style of the ever-popular Mamola, the sensational spills and the memorable first 500cc win for Wayne Rainey.

Finally in this collection is 1989, and as the curtain fell on the 1980s, the championship delivered a gripping and tightly-contested title battle. The 15-round series was packed with thrills and spills as the world championship circus travelled the globe, from the first round in Japan to the title-deciding final race in Brazil. As three-times champion Lawson got to grips with his new Rothmans Honda mount, fellow American Rainey established himself as the early leader, his consistency on the Lucky Strike Yamaha establishing a dominant points position by mid-season. But a rider of Lawson’s calibre was never going to give up, and he fought his way back into contention. His lead whittled down to just 6.5 points, Rainey’s season turned to disaster in Sweden when he crashed out. The title battle came down to the final round, where ‘Steady Eddie’ confirmed his status as one of the greatest riders ever. Although tearaway Texan Schwantz was always in the mix, securing six wins, hopes of a title tilt evaporated in a season plagued by mistakes and mechanical problems. The season was also a disaster for Lawson’s Australian teammate Gardner who, after victory at his home race, crashed out of the US GP, breaking his leg. This disc is packed with all the memorable moments of an unforgettable year, including Mick Doohan’s debut, Mackenzie’s stunning ride at his home race and Pierfrancesco Chili’s hollow home victory at the controversy-hit Italian event. This 103 minute disc reviews a stunning season of highs and lows, featuring breath-taking elbow-to-elbow racing, expert commentary and fascinating insights into the on-track action and off-track controversy from the riders themselves.

"This new six-DVD collection from Duke video features reviews from every 500cc championship season from 1984 to 1989. The opening DVD brings together all available archive footage from 1984, with highlights from eigh trounds, while the other discs have 'action and drama from every round'. More than 20 hours of race to drool over" Motorcycle News

The 1990s were a decade of high drama and

If compilations of highlights from each season